The Federer-Djokovic Rivalry is Back into the Spotlight 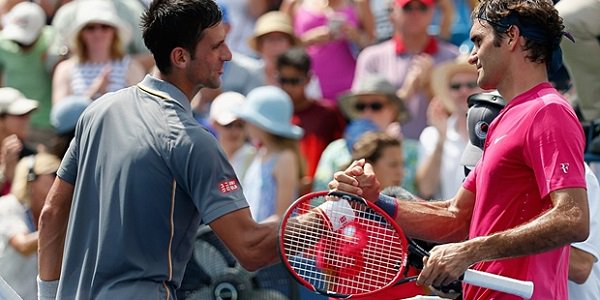 Roger Federer gave himself a present for his 34th birthday by defeating Novak Djokovic at the final of the Cincinnati Masters on Sunday. Just a day after Andy Murray took over his ATP world number two ranking, the Swiss player had a superb performance. The creativity put into the match by the 17-time Grand Slam titlist, surprised many. As a result, the Federer will return to the world number two ranking and continue the Federer-Djokovic rivalry.

While making US gambling news and earning his seventh Cincinnati title, Federer prevented Djokovic from making history. The world number one was on the verge of becoming the first singles player to win all nine ATP Masters 1000 titles. Federer spoke of his performance. “I tried to really mix it up on his second serve and I was hoping to serve good enough myself to keep me out of trouble.”

The Federer-Djokovic rivalry was in full effect

The Federer-Djokovic rivalry continued on Sunday as the Swiss star displayed his serve in almost flawless execution. Djokovic couldn’t secure a single break point against his formidable opponent. Federer hasn’t lost a service game in 49 games. In addition, he complemented his play with aggressive returns. The Serb was kept off-guard by the consistent pressure placed on Federer’s speedy forehands and backhands.

The Federer-Djokovic rivalry became heated as the world number one demonstrated what he was made of. The hottest player this year had his own serving performance. The first set tie break was a superior event. Djokovich had the Wimbledon champion down 4-1, but he would lose the next three points losing the set. The Serb gave it his best shot and began to see the perennial demons that kept him from winning this tournament for the last five years.

Djokovic, who normally smells “blood in the water” in finals, was dragging from the start of the second set. Serving three double faults in the second game, Federer took over the match. Delivering a plethora of unreadable serves, Djokovic couldn’t create any advantage for himself. Even when the world number one had Federer in their only deuce, the Swiss player calmly made the next two points winning the game.

The point which created that deuce, would be the last point Djokovic would experience for the remainder of the match. Federer dominated the last set clinching him the title. Djokovic spoke about his loss. “It’s the fifth time that I’ve been in the finals and I’ve never won this title, so I guess I have to wait for Roger to retire and then try to do something after.” Federer’s new number two ranking will guarantee him to face Djokovic in the final which will cause a flood towards online sportsbooks in the US.

The Federer-Djokovic rivalry has been around for some time

Out of the 41 matches Federer and Djokovic played, their rivalry stands at 21-20 in Federer’s favor. The Swiss champion knows that his days are limited, yet he now plays with a renewed, almost “hungry” vigor. Instead of taking on the near impossible task of matching his younger opponents rallying ability, Federer has chosen smarter play which is being instilled in him by his tennis legend coach Stefan Edberg.

Edberg, a former no. 1 himself, prepares Federer to take back his throne

On hard courts Federer has a 16-14 advantage over his rival. The Federer-Djokovic rivalry is “dead even” on clay with four wins each. The Serbian champion only leads Federer on grass 2-1. The Federer-Djokovic rivalry is considered by many tennis critics to be largest in Grand Slam history. In the 13 Grand Slam matches between the two, Djokovic leads 7-6. The Serbian champion is the only player besides Rafael Nadal to defeat Federer in consecutive Grand Slam tournaments.

It seems as though Djokovic and Federer have spoiled each other’s victory attempts. In 2011, Federer disrupted Djokovic’s perfect 41-0 season record with a French Open victory. Of course the world number one took vengeance upon the Swiss champion by beating him and taking the U.S. Open title for the second straight year. In 2014, Federer broke another 28-match streak held by Djokovic in China.

As for Federer’s other rivalries, Andy Murray has beaten the Cincinnati Masters champion only 11 times out of their 25 encounters. Although Federer has won more Masters 1000 titles, Murray has beaten him 6-3 in ATP Masters 1000 confrontations. Nadal is the only player to have a significant lead over the Swiss champion beating him 23-10, according to online casinos. With Murray’s inconsistency in finals appearances and Nadal’s disappearing abilities, the Federer-Djokovic rivalry will teach many punters how to earn money online Philippines or anywhere else.