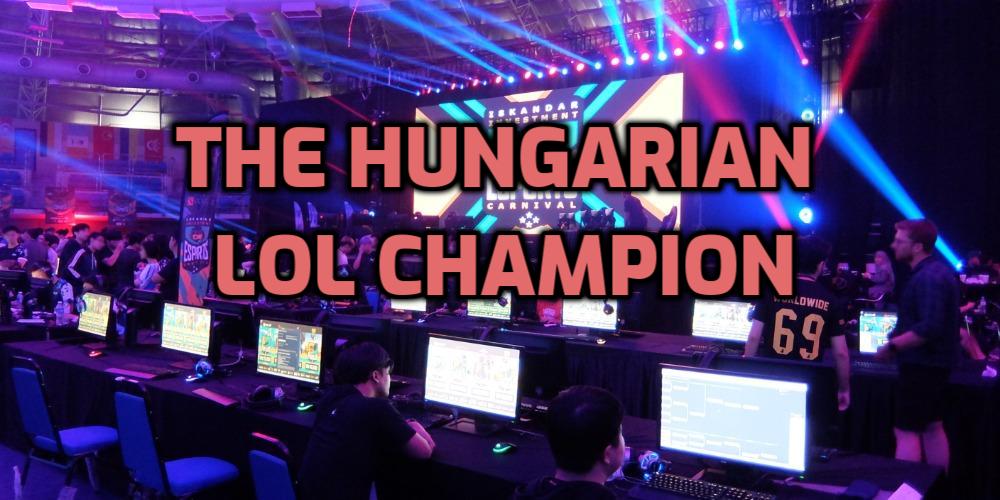 League of Legends is the heart of esport gaming. Because it requires an intense amount of tactical thinking, focus, and teamwork. Pair these skills with years of gaming experience and refined reflexes, and you get what it takes to become a professional League player. This is why online sportsbook sites in Hungary are hosting betting opportunities from unprofessional matches to World Championships. Have you ever heard about the Hungarian LOL champion? If not, then let’s check this article!

The Early Career of the Hungarian LOL Champion

Tamás “Vizicsacsi” Kiss is most famous for his run with the team called Unicorns of Love. However, his career and professional gaming attempts started way earlier than that. Vizicsacsi was a professional Age of Mythology player and he also used to play chess competitively. This explains a lot about his character as a professional player. Age of Mythology and Chess are single-player games, and Vizicsacsi so happens to be a top laner. A position in League is known for being a solo-heavy lane. He made attempts to become a professional League player during Season 2, 2013. First, he joined Animate eSports, playing in the Paris Championship. Then later he joined Eternity Gaming, and Skill or Luck. While offering experience, neither of these teams was offering him a long-lasting career.

In March of January 2014, Vizicsacsi joined the famous LCS team, called Unicorns of Love. At that time, he was studying psychology at university, for two and a half years. Then he decided to leave his studies, to be able to participate in the official Championship hosted by Riot Games. First, his parents were skeptical about his career, because back then, League of Legends was not a consistent and professional career to pursue.

But Vizicsacsi made a good decision and moved into the gaming house of Team UOL. Their first moment of greatness was when, according to the commentators of the match: “They demolished Team Gambit”. Everyone was surprised about how skillful the players of this new team were. They were also a fan favorite due to their cheesy name, and pink logo, paired with their mascot, a guy dressed in a unicorn dress.

Gathering more victories than losses on their run, soon they had to face Team Solo Mid. Because of this moment, UOL became a team that is not going to be forgotten anytime soon. At the time, TSM had the strongest matchup they ever had. With Bjergsen, the best American mid laner joining the team. Yet, Unicorns of Love defeated Team Solo Mid, much to the surprise of those who decided to place bets against the new, “amateur ” EU team. According to an interview with Esport1, the biggest early hardships of UOL was the time they had compared to other teams. While most professional teams had chefs, cleaning services, coaches, etc. While Unicorns of Love were not able to afford those at the time. The time they spent cooking and researching athletic training or strategies could have been spent on practicing had they been able to afford it.

Shortly before UOL released its entire roster, he decided to change teams. He was seeking a team that could provide him with a good staff, including a coach. Schalke 04 had that, and Vizsicsacsi found the roster promising. They weren’t legendary players, but he trusted the team management to make good decisions when picking players for other roles. He expressed that the atmosphere was not the best.

They were falling out of the championship for the first time in his career. But as the summer season concluded, they improved and got into places. However, he only spent one year at the team, knowing that eventually, the team would fall apart. This is when he decided to join Splyce.

Splyce Offered a Position For Him.

Accepting the offer, as he saw that there is a solid coaching team and player roster. They fell out of the championship earlier than his previous team, Schalke 04. Feeling a bit shaken as a team, they lost to G2 Gaming in the quarter-finals. According to Vizicsacsi, it was not about a skill difference, more so that they used up all of their motivation to get into the championship and to reach the quarter-finals. Eventually, they had to face SKT, the strongest team in League of Legends history. Facing the best player of all time, Faker. They lost due to the difference of skill, but there were at least highlights in the career Splyce. For example, when they won a match in which they were put into a 10.000 gold difference.

Retirement of the Hungarian LOL Champion

After Splyce was not performing the way he imagined it, he began to think about retiring from the professional scene. He’s been considering retirement for a long time, but he also was thinking about his options. He was thinking about switching roles from top laner to support. But instead, he decided to retire and become the coach of other teams. In 2019 he received a nomination to the Hungarian Sportgala, as the best esports player. And obviously, he wins the award. Today, he is working as the positional coach of other teams. As coaching was important to him as a player, he made sure to provide teams with the support he dreamed of receiving.

Betting on League of Legends

If the Hungarian LOL champion’s story motivated you to get into watching League tournaments. You can follow the career of the Oceanic Team called “PEACE”. Because Vizicsacsi is their positional coach! And if you decide to watch LOL tournaments, you should also try placing bets on League of Legends. There are many matches and tournaments you can follow on  22BET Sportsbook. Do you think Vizsicsacsi will ever return to the professional scene?