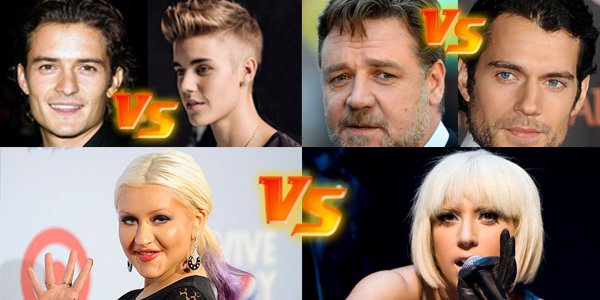 The media reports that Orlando Bloom and Justin Bieber had quite the “brawl” at an Ibiza restaurant recently. If boxing promoters and bookmakers organized a real fight, I’d wager my money on it.

The celebrity gossip machine never fails to captivate me. I complain endlessly about the useless, uninteresting crap spewed by celeb news rags like the Globe and TMZ, but as a closet gossip-guzzler myself (sometimes I look back and realize I spent the past 45 minutes looking through the Daily Mail), I can’t deny that I get a large measure of pleasure from reading mindless stories about insignificant events concerning Hollywood phonies like George Clooney and Miley Cyrus.

The recent coverage of the Orlando Bloom vs Justin Bieber fight (“fight”) at a restaurant in Ibiza captured my attention even more than usual. The story involved three things: pampered entertainment industry brats, beautiful supermodel Miranda Kerr, and most importantly, violence. How could I resist? How could anyone resist?!

Considering that I mostly write about casino gambling and betting on sports in the UK and North America, the juicy story gave me an equally juicy idea: what if boxing promoters and bookmakers put together boxing matches between Hollywood stars and starlets? Sort of like the classic MTV show Celebrity Deathmatch, but in real life and without the death and blood!

Still reading? Good. Here are the top fights I’d wager my money on, starting with Logolas vs The Biebz:

Justin Bieber is a 20-year old with the voice of an angel and the body of a 12-year old girl. He may hail from the harsh landscape of Canada, but the frontier lifestyle clearly never sunk into him. The toughest part of his week is deciding which burrito place to go to for lunch.

• Russell Crowe has been arrested for assault several times

In the other corner we have gorgeous upper-class English actor Orlando Bloom, a grown man at age 37 but a grown man whose days are filled with vegetable shakes and gym sessions (toning, not sparring). He described his life in the US: “Being a Brit, I’ve spent most of my time here either in New York or L.A.” Not exactly towns for tough guys, unless you live in the Bronx or North Hollywood.

The idea of these two brats duking it out in front of a live audience is too delicious to pass up. Reports from their real fight were iffy on whether Bloom had actually landed a punch or not. I can hear the exchange now:

Bloom: “I would punch you really hard, but then my hand would hurt! Oh, what to do?”

In a far cry from the pampered golden boys mentioned above, these Hollywood hunks are cut from a rough cloth and could hold their own in a fight against almost anyone.

Let’s consider the similarities. Both are big, muscle-bound action stars. And these guys aren’t paper tigers; they’ve shown an interest in performing their own stunts. Just as important, both are known for being hot-headed.

In his younger days Crowe had a problem confining his violent instincts to the movie set, being arrested for assault several times. He’s thrown his large body around in scuffles in the US, Canada, Australia and his native New Zealand, even earning his own South Park parody:

Cavill is no slouch either. The British actor and model can’t boast the number of public battles his opponent has, but earlier this year he found himself in a well-publicized bar brawl in a rough-and-tumble industrial city in America’s heartland. Where, you ask? Detroit. Anyone who goes to Detroit and gets into a bar fight is tough in my book.

The two actors are about the same size, while Cavill is quite a bit younger and most likely quicker. That would give him an advantage, but I think that Crowe’s experience would help him do a number on his opponent. Cavill may be the man of steel, but Crowe won me over with the Gladiator, even if it was more than 10 years ago.

This one is tailor-made for the mobile betting generation. The feud between the two starlets, which began back in 2009, has involved many statements by the two singers as well as third parties, with Team Aguilera originally accusing Gaga of ripping off the former’s music, and Team Gaga generally countering that Gaga is the more talented and influential artist in her own right.

I think that a fight between these two hot-blooded pop stars would be one for the ages. Why? While neither looks the part, both are tough as nails. Gaga is from a working-class Catholic family, an upbringing that more often describes a boxer than a pop singer.

As for Aguilera, the daughter of a US Army soldier knows a thing or two about fighting as well. If the two met in the ring neither would back down. Expect 12 rounds or more. But the fact that Gaga is taller and a bit younger could give her an advantage.