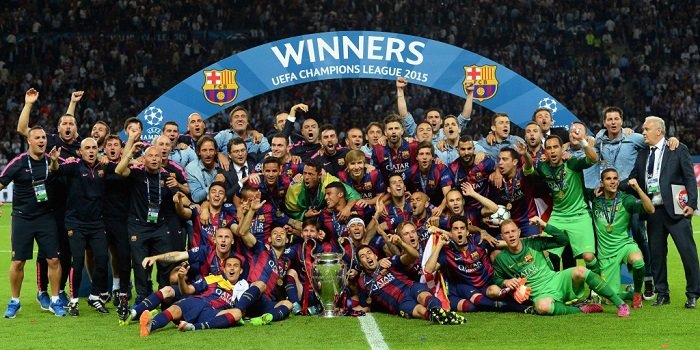 There are only a few European clubs that managed to win the three most prestigious trophies in one season, and here we provide you with that list.

Clinching the national league is the goal of every major club season after season, as it represents that they were the most dominant team throughout the campaign. It gives them status and adds value to their overall history as an association club.

However, winning the Champions League is the second most important objective, as that one proves that they are indeed the best team in Europe.

Adding the Cup triumph to that makes it into what is known as The Treble, however achieving such a feat is quite difficult as clubs have to maintain a high level of focus and consistency across three different competitions. That is why only 7 clubs in European history have managed to accomplish this remarkable milestone, according to mobile betting sites.

Scottish side Celtic FC are one of the most iconic teams in Europe, with a rich history that many clubs are envious of. They were in fact the first club to achieve The Treble, sealing it in the 1966-67 season, which saw them win the Scottish First Division, Scottish Cup and the European Cup (now known as Champions League). However, that is not all as they went even further by winning two more trophies that same season. The Scottish League Cup and the Glasgow Cup were added to their trophy haul that year, which resulted in Celtic achieving the Quintuple. Only a handful of clubs have recorded such accomplishments.

The second team that won The Treble was Dutch powerhouse Ajax, when they clinched the Eredivisie, the European club and the KNVB Cup all in one season (1971-72). This came in the middle of their European success run, considering they won the European Cup the year before and the year after sealing The Treble. In those days they were led by the highly skilled Johan Cruyff, which can be credited as the reason for the great achievement.

Sixteen years after Ajax added The Treble to their display case, their fierce rivals did the same. In the 1987-88 season, PSV won the Dutch league, Dutch Cup and most importantly the European Cup. This made them only the third club in European history to win all the three major trophies in one single season. Gambling news reports that they were then led by the popular and charismatic manager Guus Hiddink, who managed to make PSV into a serious European force.

The next Treble didn’t come for another 11 years and that is when one of the most famous teams added their name to the list of elite clubs of winning the three important titles. Manchester United clinched the Premier League and the FA Cup in the 1998-99 season, and all that remained was the big elephant-ear-shaped trophy to give them their first Treble. In the final at Camp Nou, it seemed like Bayern would be handed the Champions League crown, however in the dying moments, strikes from Sheringham and Solskjaer overturned the result to 2-1. This eventually saw them clinch The Treble, an achievement that saw manager Alex Ferguson receive a knighthood by the Queen.

Barcelona’s first treble came in 2009, but they quite overachieved that year

It would be another ten years before the world of football saw another European team lift the league, Cup and Champions League titles. Barcelona was the one that did that in 2009, after winning La Liga, Copa del Rey and the Champions League. But that wasn’t the end to their story as they went even further in their efforts. They added the UEFA Super Cup, Supercopa de Espana and the FIFA Club World Cup that same year. Barcelona thus became the first and only team to achieve the Sextuple, getting their hands on every single championship trophy that then entered.

Mourinho is a winner, and he made Inter the top dog in European football, too

One year after Barcelona’s remarkable success, Inter Milan did the same by winning the Serie A, Coppa Italia and the Champions League trophy. Before the success in 2010, the last time they won the European Cup was in 1963-64 and 1964-65, which means that they waited 3 and a ½ decades to see their club list the elusive title once again. The achievements made that season were due to one man, the “Special One.” Jose Mourinho transformed the Italian side into a European threat that was led by a squad composed of Diego Milito, Wesley Sneijder and other iconic players.

T-riple, they didn’t even count the German Supercup

Three years later, Bayern Munich replicated the same performances which granted them with The Treble. They won the Bundesliga, DFB Pokal and the Champions League – a trophy that eluded on two previous occasions in 2010 and 2012. Manager Jupp Heynckes made some big signings at the beginning of the season, which helped them in their efforts on all three major fronts.

The only team that has won The Treble twice is Barcelona, as they have done so in 2009 and most recently now in 2015. They first clinched the league title, which was followed by the Cup triumph and then on June 6th they won the Champions League against Juventus in a thrilling final that ended in 3-1 for the Catalans. The Turin side were heavy underdogs for the final, according to online sportsbooks in the EU, so they didn’t really have a chance to make a serious impact. Barcelona will be aiming to replicate the success of former coach Pep Guardiola, who won three more trophies in 2009 after sealing The Treble.