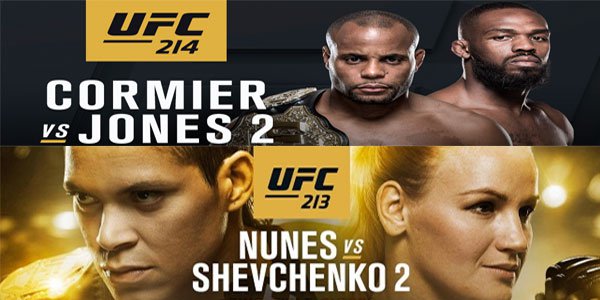 Let’s discuss UFC 213 vs. UFC 214. Which has the better main event? Which offers better odds for those looking to bet on the fights?

Two of the biggest UFC cards of the year will be taking place this June. In the past, international fight week has been the time that the UFC puts on its biggest show of the year, however injuries have led some to believe that UFC 214 just a few weeks later is actually the better card.

In this article we’ll break down a few of the main fights for each card, and discuss the betting odds attached to each fight set by one of the best online sportsbooks in the UK, Bet365.

Many hardcore fans believe the co-main event of UFC 213 is really the top fight on the card. With current champ Michael Bisping on the sidelines, two of the top middleweight contenders will face off for the interim title.

Yoel Romero KO’d Chris Weidman with a flying knee in his most recent bout (photo: mmajunkie.com)

Yoel Romero has rattled off 8 straight wins at middleweight to get to this point. He’s one of the best wrestlers in the sports, and will undoubtedly be the bigger fighter when he steps into the cage. At the moment, he’s given even odds of 1/1. Robert Whittaker is an extremely skilled striker, and is entering into this fight as the slight favorite with odds of 4/5.

While there’s some debate over whether Cyborg or Woodley will be in the co-main event of 214, for arguments sake we’re going to say it’s Woodley in the main slot. The current welterweight champion has defended his belt twice now, and may earn himself a shot at George St. Pierre with a win over Demian Maia. Bet365 has yet to release the odds for the contest, but it seems likely Woodley will enter as the slight favorite.

Demian Maia likely earned his shot at the title months ago, but it took a recent victory over Jorge Masvidal to finally get the UFC brass to give it to him. Maia is the most dominant grappler in the sport right now, with seven straight victories over some of the most dominant names in the sport. This fight makes the UFC 213 vs. UFC 214 discussion difficult, as it’s one of the most interesting matchups style wise in the game right now.

Topping the card at UFC 213 is a women’s bantamweight title matchup (and rematch) between Amanda Nunes and Valentina Shevchenko. Nunes won the belt against Miesha Tate in July of 2016, and successfully defended it 5 months later with a first round thrashing of Ronda Rousey. Nunes won the first match with Valentina, and is being given odds of 11/10 to get the win again this weekend.

Valentina Shevchenko is one of the most decorated strikers in MMA right now, but has shown a unique ability to finish fights with submissions lately. She began to take over the fight in the third round, prompting some MMA betting experts to feel she will make UK gambling news with the win this time around. Her odds are also listed at 11/10.

This is the most obvious talking point when it comes to UFC 213 vs. UFC 214. Perhaps the most anticipated MMA fight of this year is the grudge match between Daniel Cormier and Jon Jones, and it’s by far the better main event than 213’s. Cormier lost to Jon back in January of 2015, and has since gone on to win four straight fights with 3 title defenses. Despite being the more active fighter, DC is listed as the Bet365 MMA betting underdog here with odds of 2/1.

Jon Jones was, and still is, seen as perhaps the greatest fighter in the world. He dominated virtually every single fighter he faced inside the octagon using his striking, wrestling, and jiu jitsu. Legal troubles have plagued his career, but Jones now has odds of 2/5 to get the win a second time over Cormier.

What do you think of UFC 213 vs. UFC 214? Which is the best fight on either card? Tell us what you think in the comment section below, and head to Bet365 to find a full list of 2017 MMA betting odds.