The DOJ seized AP software and database with plans to resell them to reimburse players who lost money after Black Friday. 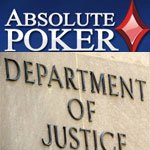 The US Department of Justice confirmed that it is in the possession of the Absolute Poker software platform. American gambling news specialists reported that the authority received the copy of the software from the Korean developers who were responsible for servicing the platform for the infamous poker company.

Quad Dimensions CEO Young Jae “Christian” Lee renounced any claim his company had to the Absolute Poker platform, one of the online poker sites in United States having problems after the Black Friday.

“Christian” Lee, his partner “CJ” Lee and several other Quad Dimension shareholders were left with nothing after Absolute Poker went bankrupt. AP’s owner firm Madeira Fjord was forced to give the control of the company’s assets back to the Avoine front company Blanca Games after a rescission agreement.

In the meantime, US Attorney’s office is investigating Absolute Poker’s owners group, Avoine Servico de Consultadoria e Marketing for a series of offenses.

The DOJ seized the software and the company’s database with plans to sell them on the market. The authority hopes to raise funds to clear up some of the legitimate claims against Avoine. Many former AP players lost all their money they had on their accounts after Black Friday caused by the change in American gambling laws.

Experts doubt if the software and the database has any real value on the market. The Korean developers have not improved the software for quite a while, and most of documentation is written in Korean. The Absolute Poker player database is not likely contain anything valuable to big players as most of the information is already included in Full Tilt Poker data, acquired by Poker Starts in the near past.

Also related to the story: the DOJ is likely to dismiss the Kentucky Commonwealth’s claims that result from the massive 2008 domain seizure attempt of 140 gambling-related URLs.