Cake Poker closed down for US players and began shifting existing players from its .eu domain to Juicy Stakes Poker. 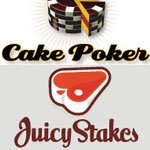 Revolution Gaming Network is again in the American gambling news. A few days ago Cake Poker announced they are not accepting US players in the future, and now began shifting its American players from its .eu domain to Juicy Stakes Poker. Interestingly, both sites are on the same network owned by Jennifer Larson.

According to the Cake Poker spokesman, the move was in accordance with of the operator mainly focusing on the European market instead of online poker sites in United States. The transition of American real money poker players to Juicy Stakes will be finished by September 27.

All three sites are owned by Gibraltar-based Domain Holdings Limited and IP Limited. A few months ago, Colt Poker accepted US players who were kicked out by PowerPoker.

Juicy Stakes emphasized that player balances, gold chips and loyalty levels will all be moved over the new Juicy Poker account.

The reasons of the player shift are not clear. A .eu domain is safer than .com domain in terms of the keeping the US government’s eyes away from player accounts. Even with an unfavorable change in American gambling laws, the US authorities have to stay away from a .eu domain, whereas technically it would be easier for them to seize player accounts from a site operated under .com TLD (top-level domain).

Even though the company stated it wants to focus on Europe, US Americans still make up most of Cake Poker’s clientele. Industry estimates put the firm’s non-US player base at only about 20-25%.

Industry insiders started to rumor that Jennifer Larson might be willing to sell the American players on Cake sites to another company, possibly also related to her or her business associates.