After New Jersey followed Delaware and Nevada allowing online gambling in the state, West Virginia is also considering such a move. 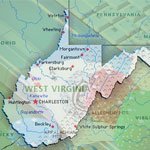 New Jersey became the third US state to legalize online casinos in United States after Nevada and Delaware. Other states are also looking in this direction, with the latest candidate, West Virginia seriously considering the prospects.

John Musgrave, West Virginia State Lottery director, has been quoted by American gambling news saying that online gambling is “…the way of the future.” He is confident the industry can convince the state lawmakers to at least consider the possibility.

The revenues of the West Virginia Lottery have been dropping steadily during the last couple of years, as the newly built border state casinos have been luring customers away from the state’s panhandle casinos.

Musgrave also noted that West Virginia has been riding the innovation waves, creating new gambling opportunities in full compliance with the American gambling laws – racetrack video lottery and table games. However, during the times when the whole industry and competing states are moving onto online arena, West Virginia must be looking there too.

Musgrave commented: “We’re a little bit behind right now. There’s really going to be a shift in the way that we do business, and we’ve got to participate in that.”

The exec noted that his fellow lottery officials in other states estimate the industry is losing out billions to offshore gambling establishments every year. While these gambling companies operate with little or no regulation, there are many security risks involved for the customers.

This problem can be solved by the states themselves regulating and governing the online gaming activities available to state residents. Not to mention the much-needed revenues for the state coffers.

Let’s hope West Virginia lawmakers will be quick in researching and ruling on online gambling prospects in the state.