Whittaker vs Darren Till Odds – A Fight For Title Contention

News >Whittaker vs Darren Till Odds – A Fight For Title Contention 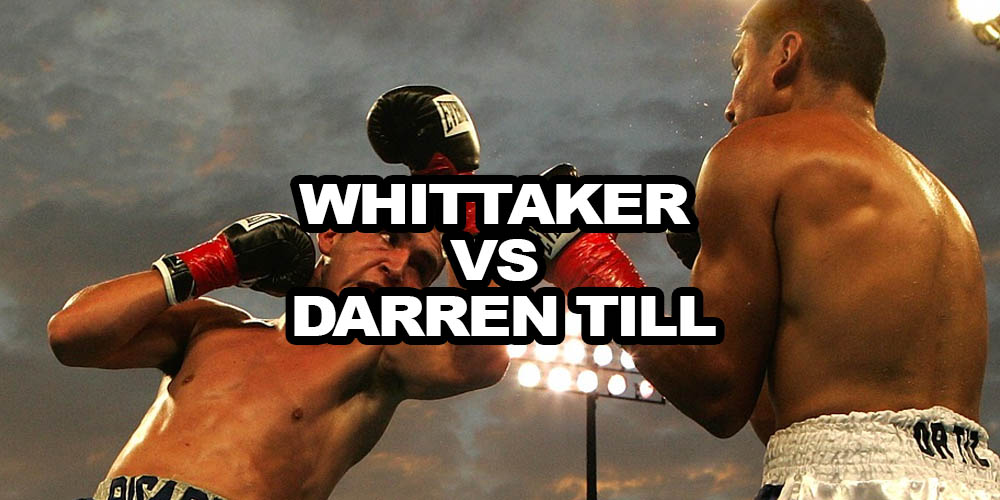 Whittaker vs Darren Till odds are available. This is one of the most hyped fights in the middleweight division. Reports show that the fight will happen on Fight Island on July 25. The UFC has confirmed the fight after the fighters previously verbally agreed to fight each other. So, what are the implications of this fight? And how do both fighters compare against each other? Let us find out!

Someone is Getting Knocked out

The reported clash between the two middleweights is going to be a striking match. Both are excellent precise strikers with a southpaw-orthodox fighting style. Whittaker has a record of 21 wins and 5 losses in his MMA career. Out of those 21 wins, 10 came by way of knockout. On the other hand, Till has 18 wins and 2 losses on his record, and 10 of those wins came by way of knockout. Therefore, the likelihood of this fight to end in a knockout is high as both fighters have the necessary power in their fists. In a recent interview, the British former welterweight expressed his feelings and prediction about the fight claiming that Whittaker will go down in the second round. On the other hand, The Reaper will be looking to earn a shot at the title after losing his belt to Israel Adesanya in October of 2019.

Whittaker vs Darren Till Odds: Winner Gets a Title Shot

Robert Whittaker is currently ranked number one, while Till is ranked number four in the middleweight division. Therefore, the winner of this fight will certainly earn a title shot after the current champion Adesanya defends his belt against Paulo Costa. After a 9-fight win streak, Whittaker is coming off a loss against Adesanya who finished the fight in the 2nd round with a knockout. After the loss, the former champion expressed “Obviously I’m disappointed, but I took the fight to him…This is my first loss in the division and trust me when I say I’m not going anywhere”. With those words, expect The Reaper to come back stronger and better than ever as he looks to regain his middleweight belt.

Darren Till on the other hand is new to the middleweight division. After challenging for the welterweight title and a second loss against Masvidal, The Gorilla decided to move up to middleweight. He won his debut fight at the new weight class against number 7 Kelvin Gastelum with a very good performance. However, he caused so much controversy saying that he was scared going into that fight. But that does not shadow the impressive skills he brings into the octagon. Will the British fighter find success in his new weight class? The answer depends on the outcome of his upcoming fight. Online sportsbook sites in the US have released their Whittaker vs Darren Till odds, and they are quite balanced. For instance, odds on 1xBET that Whittaker redeems his loss and wins are 1.66, while Till’s odds of winning are 2.3.