Who Wants To Bet Real Money That Atlantic City Will Ultimately Go Broke? 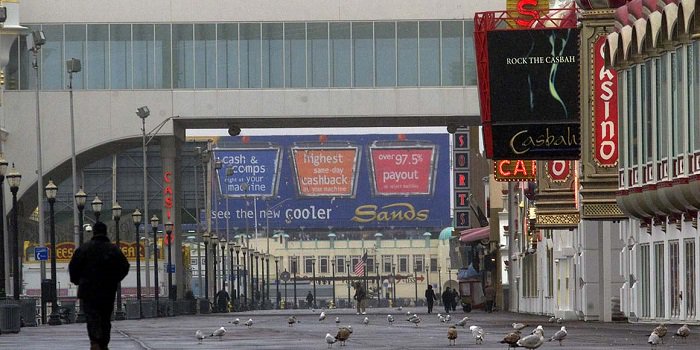 Declaring Atlantic City bankrupt because of a massive budget deficit could have a butterfly effect.

With four casinos closed, a $100 million gap in its budget and tax appeals by at least five casino properties, which is possible under US gambling laws, the odds of Atlantic City becoming bankrupt is pretty high. Also as if those weren’t enough, Atlantic City’s property values have fallen 2:3 since 2010. The deficit is up with increased spending which also means debts due can’t readily be paid back.

Wall Street has amplified the fear of financial crisis in the resort town by downgrading the city’s bond ratings to junk bond status. But the Christie administration, which took over the city’s finances in January through the appointment of an emergency manager, is not yet talking about bankruptcy. In fact, it is not saying much of anything at all, as it works to figure out a way for the city to pay its bills.

Bankruptcy not even mentioned in 60 day assessment report

An unidentified official said of the bankruptcy speculations that “I do not see a need to file for bankruptcy. I think they can negotiate their way through it”. Not so long ago, Gov. Chris Christie’s had appointed Kevin Lavin, an emergency manager, and his special consultant, Kevyn Orr, an attorney who helped to get Detroit’s out of bankruptcy, to serve on his emergency management team .

However, the 60-day assessment report by Lavin, handed over in March, was careful not to use the word “bankruptcy”. The governor’s office refused to have Lavin meet with US gambling news and other media. Orr has since gone back to work for his former law firm. However based on Lavin’s interim report,the possibility of debt service and other payment deferrals as early as fiscal 2015 is seen as one way to rectify the city’s budget deficit.

Hiring of bankruptcy experts a normal thing to do

Even as the financial concerns mount in Atlantic City, ex-deputy director of the state Division of Local Government Services, Mark Pfeiffer, who currently works with the Bloustein Local Government Research Center at Rutgers University, insists that bankruptcy can still be averted.

“I think it can be done, but it requires the city to get its cost structure consistent with the new environment,” Pfeiffer confides. In reality, for most it seems rational that Atlantic City is faced with long-term debt obligations. There is also no doubt though that when The Showboat, Revel, Trump Plaza, and Caesars closed their doors, it left a big gap in the economy.

A disproportionate figure of 29 workers for every 1,000 residents

So many continue to blame the city’s financial affliction on the cave in of the casino industry. Atlantic County residents continue to feel the effects of the closure of the 4 casinos last year. More than 1/3 of residents in the county receive some form of assistance, including 23,290 people on food stamps. This, a decrease in tax revenues, and tax appeals that have cost $186 million in refunds, followed.

Analysts also pointed out that the reason the Christie administration has not willingly excluded bankruptcy is that, it is exactly the talk they need to have for negotiations with Atlantic City municipal unions. It seems that the city’s labor contracts are disproportional to its ability to afford them. There are approximately 1,150 employees working for the city, which caters for 39,551 people .

Declaring bankruptcy as a potential course of action

Donald Guardian, Atlantic City ‘s mayor has suggested that the city lay off 228 jobs as of June 26, including a 1/3 of the fire department. But even with that possibility, the total per capita workforce is still larger than that of Newark, where there are only 11 employees for every 1,000 residents. Josellyn Gonzalez Yousef, of Moody’s Investors Service, labels Atlantic City’s woes as serious and that Atlantic City has a huge budget deficit to deal with.

He continued saying that “Whether they will spiral into bankruptcy is not something we’re positioned to say right now. It’s potentially a dire situation”. While David Fernández, a public finance attorney from Buchanan, Ingersoll & Rooney, New York, said creditors should consider restructuring if the city is to get out of its financial mayhem. He, like many others believes that attracting luxury casinos to the area is not going to give Atlantic City the revenue stream needed to make everyone content.