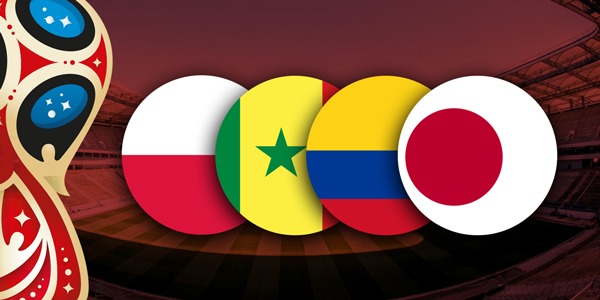 The last group in the 2018 World Cup will be one of the most entertaining to watch. With so many outstanding strikers involved, audiences can expect to see a good number of goal celebrations. Online betting sites in Russia are also offering bets on the top goalscorer of Group H. So who do we expect to feature in those goal celebrations with the most consistency?

Actually, not the bookies’ favorite. The top goalscorer is arguably the hardest category of the Group H betting specials to predict but the statistics could give some ideas to gamblers. Turns out that the safest bet on the top goalscorer of Group H might not be a Polish player but a Colombian one. Let us take a look at the strongest contenders.

The Polish striker deserved the attention of online sportsbook sites in Russia with his remarkable consistency. However, Lewandowski caused the most distress to goalkeepers in qualification campaigns. His records there are indeed impressive: not only did he emerge as the leading marksmen in the UEFA EURO 2016 qualifiers, he has also scored 16 times in the qualification campaign for the 2018 World Cup.

The illustrate the weight of those numbers: his output in the European Championship qualifiers surpassed Cristiano Ronaldo’s records by one goal and made him the top scorer in Europe (only Ahmed Khali and Mohammed Al-Sahlawi amassed the same number of goals as Lewandowski, but in the Asian qualification).

In the tournament phase, however, he is less remarkable. In the above-mentioned UEFA EURO 2016, for instance, he only scored once (against Portugal in the quarter-finals); his teammate Blaszczykowski happened to outdo his goal output. At the 2012 EURO, he also scored one goal.

He will undoubtedly be a key player for Poland; it’s not a coincidence that Jurgen Klopp has pointed out Lewandowski’s playmaking abilities. Still, he will probably not finish as the top goalscorer of the group.

The 8.00 that Unibet Sportsbook offers for Falcao is a steal: he is just as dangerous as Lewandowski. This is demonstrated by their odds to become the top goalscorers in the entire tournament (both of them have 34.00 to be the no. 1 goalscorer and 9.00 to be among the four best). If Falcao has the same chances for winning the Golden Boot as the Polish star, he surely has a good shot at upsetting the Group H betting specials, too.

The Colombian forward missed the last World Cup due to an injury and will surely be eager to make up for that in Russia. Due to his ability to take over games, he has been compared to football legends Pelé and Maradona. As the video below illustrates, he has been in excellent form this season and has everything: headers, long distance shots, lightning-fast reactions, etc. Indeed, the only thing missing from his arsenal that Maradona had is the Hand of God.

Speaking of Falcao’s injury before the 2014 World Cup: it put a lot of pressure on his young teammate Rodríguez but it all worked out well for him. The no. 10 scored at least one goal in every game Colombia played in the World Cup four years ago and won the Golden Boot Award (given to the top goalscorer in the tournament).

Unfortunately, he has lost a great deal of that momentum following the World Cup. The expectations his performance there created were so high that he could not quite meet them on club level. This led to him sitting on the bench as a Real Madrid player far too often. His transfer to Bayern Munich again put him in the spotlight, though. He has found the net six times in Colombia’s qualification campaign for this year’s World Cup, which earned him a spot in the top 10 goalscorers of CONMEBOL. His chances are almost as good as Falcao’s.

How much time do you have to bet on the top goalscorer of Group H?

At Unibet Sportsbook, you can bet on this category until June 28. However, you might want to place your bet a bit earlier: the first match of the group, Colombia vs Japan, will take place on June 19. The outcome of the game (most probably a win by Colombia) will inevitably change the betting odds, so if you are also expecting one of the Colombian superstars to lead the statistics of their group, don’t wait longer than June 18.