Will China take the whole pie on the diving competition at Rio2016? 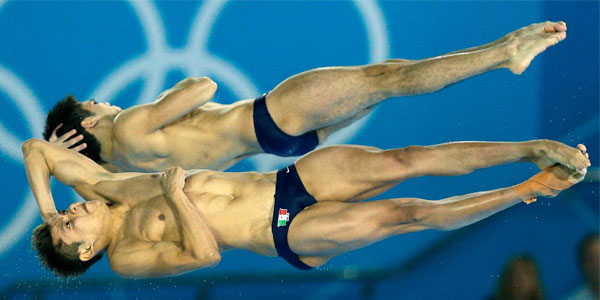 All the indicators point out that the Chinese diving Olympic team can grab all the golds at the diving competition at Rio 2016.

The diving stars of today will gather at the Maria Lenk Aquatic Center in Rio de Janeiro to prove once again that they are among the most acrobatic athletes in the world. This year’s Olympic diving competition at Rio 2016 will take place from 7th until 19th of August. It will present us many teams but only one of them according to diving fans can be said to be full of superstars: the Chinese diving Olympic team.


There will be eight competitions and eight medal ceremonies in total, both in men’s and women’s category: 3 meter springboard, 10 meter platform competition as well as a synchronized diving variant of them both. A great invitation not only for the diving fans but also for all of you who like to bet on sports in Brazil to follow this amazing Olympic discipline.

Diving at the Olympics: short history in numbers

Men’s diving is one of the sports with longest traditions at the Olympics, being present since the Olympics in St. Louis in 1904. The most successful nation so far is the USA with 53 gold Olympic medal. However, this is far from being a relevant indicator about who rules the diving Olympics in the past 20 years, since the Chinese divers joined the Olympic diving only in 1984. That is why they are on the second position on the list of most successful Olympic nations in this sport, with 33 medals. However they won 6 out of 8 golds in London and 7 out of 8 in Beijing, proving their absolute superiority in this discipline nowadays.

On an individual level Dmitry Sautin is the most successful diver in terms of numbers of medals on the Olympics with 2 gold, 2 silver and 4 bronze ones. The American legendary diver Greg Louganis, on the other side, is most successful according to the acquired golds with 4 medals in total: 2 in Los Angeles in 1984 and 2 in Seoul, four years later.

He is the leader of the Chinese diving Olympic team in Rio and winner of the last three world championships in men’s platform category. The 23 years old Chinese representative lost the gold medal in London. This year, however, he won’t let it escape him. The statistics behind the internet betting in EU, only confirm his superiority, showing that according to the odds his chances for the gold are almost secured. Take a look at this short video, if you want to be assured of the great acrobatic abilities Qui Bo possesses.

A debutant on the Olympics but coming with lots of confidence after the gold medal on the World Championship in Kazan in 2015. He is the favorite for winning the 3m springboard competition, although online sportsbooks in Australia evaluate his chances as not much bigger then those of the second favorite Rommel Pacheco.

No.3: Ivan Garcia and German Sanchez

These Mexican divers offered us an amazing performance at the Olympic Games in London in 2012. They won the silver medal there, and are without competitors on the Pan American games. If someone can oppose the superstars of the Chinese diving Olympic team, then we expect them to be the ones.