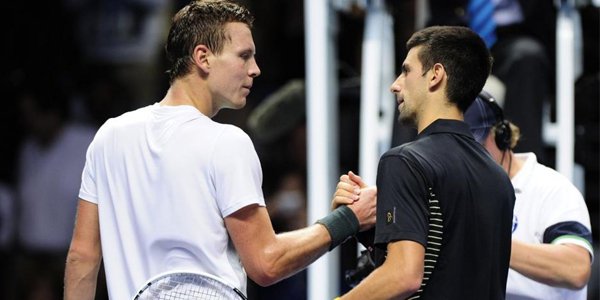 Novak Djokovic is looking to confirm his year-end number one spot by beating Tomas Berdych at the O2.

The ATP World Tour Finals are slowly, but surely drawing to a close in London, but bettors at online sportsbooks in the United Kingdom still have a couple of days to wager on the results. While the semi-final pairings will be decided today, the biggest question is will Novak Djokovic be able to retain his year-end number one spot.

Djokovic needs to win the game against Tomas Berdych in order to guarantee the spot, and deny Roger Federer the chance to clinch it from underneath the Serbian pro. Winning against Tomas will put Novak in the semis against Kei Nishikori, and also, what those who bet on sports in the UK hope for, set up the final battle against Federer on Sunday.

• Online sportsbooks in the UK immensely back Djokovic to win

Djokovic is on top form, no doubt about that, having defeated both Marin Cilic and Stanislas Wawrinka in straight sets without giving them the slightest chance. Tomas Berdych on the other hand, has surprisingly lost to Wawrinka in the opener, but went on to beat Cilic and now needs to beat Djokovic in order to advance to the semis. Naturally, such an event is highly unlikely, and most bookies under British gambling laws don’t see it happening.

Yesterday, Roger Federer once again confirmed his ambitions for the title, by crushing the home favorite Andy Murray 6-0, 6-1. Roger is going after his 7th crown, and still hopes that Djokovic will lose out to Berdych and give him a chance to scoop the year-end number one from Novak.

In the other game yesterday, Kei Nishikori overpowered David Ferrer who took the place of the injured Milos Raonic. Nishikori was also feared not to be fit with a wrist injury, but all seemed fine despite him losing the first set 4-6, the Japanese managed to compose himself and win the next two 6-4, 6-1. He booked the semi-final place and will most probably meet Djokovic there, unless something crazy happens today at the O2.

Things are pretty simple for Berdych – defeat the world number one and the semi-final spot is his. If only it was easy to do, moreover, he would need to achieve a better result than Wawrinka in his evening match with Cilic.

Tomas lost 16 out of 18 games against Novak, so the statistics are not exactly in his favor. Not to mention that the Czech player is far from his optimal form. Remembering Berdych’s spectacular loss to Djokovic oin Beijing not so long ago, and considering that O2’s hard surface is even better for the Serb, we honestly have to give the upper hand to Novak.

Djokovic will of course be super-motivated for the game, knowing that a victory will guarantee him the year-end number one spot, besides the semi-final participation obviously. Tomas has only won 1 out of 15 last sets the pair played on slow hard surface. Moreover, Djokovic was excellent in similar conditions both in Bercy a week ago, and in his two matches here.

Speaking in favor of Tomas is the fact that he manage to greatly improve his game since the match with Wawrinka, but then again his second fixture was against Marin Cilic, who himself admitted to be “feeling a little bit tired”. Djokovic certainly isn’t tired, as his previous matches reveal, and he has taken sets from Berdych 6-0 or 6-1 on six occasions during their meetings.

Only true die-hard Tomas Berdych fans will back the Czech in his match against Djokovic. The odds at the bookies confirm: Bet365 will pay at 1.07 for Novak’s success while Tomas Berdych gets a very long line of 9.00 to defeat Novak and advance to the semi-finals, provided Wawrinka doesn’t win with a better score.

While not much value can be found in the outright winner market for the afternoon game, other wagering opportunities provide players with more diverse options. One of them is certainly trying to predict and bet on the 1st set result. One of the most likely scenario when Djokovic takes it 6-1 pays at huge 9.00 odds at Bet365, his 6-2 success delivers a 5.50 payout, and 6-4 win pays at 4.00. In case the set will be taken to tie break, but still goes in favor of Djokovic the payout is 6.50. And one of our personal favorite results, 6-0 for Novak will bring a huge 29.00 payday.