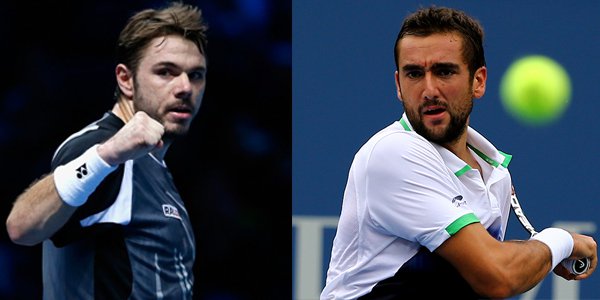 Stanislas Wawrinka will try and book his semi-final place with a victory over Marin Cilic in tonight’s ATP World Tour Finals match.

The last round robin match at the ATP World Tour Finals will be held between Stanislas Wawrinka and Marin Cilic tonight at the O2. This fixture will answer the question who gets to book the last remaining qualifying spot, both players can do so, but the outcome will certainly depend on the earlier Djokovic v Berdych match, making wagering on this fixture at online sportsbooks in the United Kingdom even more exciting.

Stanislas Wawrinka needs to win, and in case Berdych beats Djokovic, Stanislas need to beat Cilic with a better result in order to guarantee himself the semi-final spot. Marin Cilic only have one chance of advancing – beating Wawrinka with an excellent result and hoping Djokovic overpowers Berdych in style. Those who bet on sports in the UK will certainly go for Djokovic’s and Wawrinka’s wins tonight, putting them against Nishikori and Federer respectively.

Yesterday it was Group B turn to end the round robin competition. Roger Federer gave no chance to Andy Murray beating him 6-0, 6-1 in front of home crowd. Roger is still hoping Djokovic loses in the afternoon and opens up a chance for the Swiss to take the year-end number one spot. But even if that fails he will still have a chance at winning his record-setting 7th title.

David Ferrer took the place of injured Milos Raonic to battle it out with Kei Nishikori. But just as the bookies operating under British gambling laws predicted, it was the Japanese who booked his place in the semis, following the first 3-setter of the tournament.

Stanislas came back from being the underdog before his opener with Berdych, to beat the Czech player in straight sets. The Swiss went on to lose his second match to the world number one Djokovic, but no one really expected him to put up a big fight there.

Marin Cilic, on the other hand has lost both of his matches: 1-6, 1-6 to Djokovic in the opener, and 3-6, 1-6 to Berdych in the second fixture. His only hope now is to beat Wawrinka with a great score and hope that Djokovic crushes Berdych in the afternoon match.

While Wawrinka’s loss to Djokovic is quite understandable, his performance against Berdych was surprisingly good, but then again Tomas is now on his best form right now. As for Marin, there’s absolutely no excuse for his disastrous performances at the O2, and even him admitting he’s “a bit tired” doesn’t really do.

Tonight’s game will be 10th time the pair meets, with Wawrinka leading Cilic 7-2 on head-to-heads. They met only twice in 2014, with Stanislas taking both matches with the last one played on the same hard surface as tonight in Cincinnati, and Wawrinka winning it 3-6, 6-0, 6-1.

Considering that Stanislas is in a better form than Marin, it’s no surprise to find the Swiss player favored to win tonight at the majority of online sportsbooks. Bet365 for example, gives him a short line of 1.33 to seal the deal and advance to the semis tonight, Cilic is given much longer odds of 2.75 to beat Wawrinka to have a chance at advancing to the knockouts.

Apart from the outright winner odds for the match, there are other much valuable betting markets. Punters can choose to guess the result of the first set correctly and rack up great winnings. Bet365 will give 5.00 odds for Wawrinka’s 6-4 success, but the payout for his 6-2 win is much higher – 10.00, and in case he wins 6-1, Bet365 will shell out at 17.00. As for the win on tie break, the payout in this case is a mere 6.50.

Checking out the double result betting market is also rewarding at Bet365. Should Stanislas Wawrinka win the first set and then go on to take the match as well, the bookies will pay at 1.66. However, if he does win the 1st, but then loses the match, Bet365 will be paying at 9.00. In case Cilic takes the first one and wins the match – punters can collect at 3.50. A much longer line of 6.50 is given on the event when Marin Cilic wins the first set, but loses the match.