Top female surfers all over the world gather to compete in the WSL Championship. Do you know who you should bet as the winner? Our WSL Women's Championship 2018 predictions can help guide you! 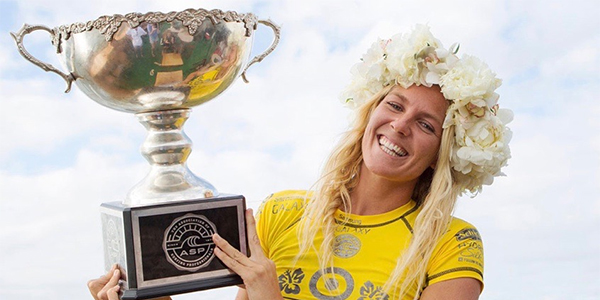 Internet sportsbook news in US reported that 6 WSL World Tours have been completed. There are still 4 more to go until the final event in Hawaii, USA. Of course, the top female surfers’ performances are contributing to our predictions of the WSL Women’s Championship 2018 winner.

Fierce Battle between Stephanie and Lakey

If you’ve been following the championship in the past few months, it’s quite clear that 2018 is all about the battle between Stephanie Gilmore and Lakey Peterson. Therefore, our main WSL Women’s Championship 2018 predictions are that either Stephanie or Lakey will win.

However, the best online betting sites in the United States favor Stephanie a little bit more. Her winning odds are 1.90, which is lower than Lakey’s at 2.30. This is mainly because Stephanie has won one more victory than Lakey with 3 World Tours. On the other hand, Lakey’s points are only 2000 lower.

Stephanie admitted that she has a strong opponent. The 3-time WSL Championship winner said “Lakey is getting better and better every single event, so this is definitely not the end by any means.”

At 23 years old, Lakey is the current number one on the WSL’s rankings. There must be some raw talent involved. When she was 5 years old, her nickname was Lakey Legend. It was when she just started surfing but was able to catch waves like a pro!

We also include Tatiana Weston-Webb in our WSL Women’s Championship 2018 predictions because of her consistency. According to US gambling sites, Tatiana’s odds of winning the championship are 14.00. Although her odds are far from the best, her consistent surfs are admirable. She has been placing seconds and thirds in almost every tour, apart from the first. Her reliable performance paid off with a 3rd ranking on the leaderboard.

Tatiana only debuted in 2015 and her best trait since is self-confidence. While other surfers might get discouraged from not placing first, Tatiana’s self-confidence in her own ability makes her frustrated. It is also this frustration that could push her to win the WSL Women’s Championship 2018.

Before we summarize the WSL Women’s Championship 2018 predictions, you might be wondering about Tyler Wright (10.00). Why is the 2017 winner not likely to win? Well, Tyler started off very rough. When it looked like she was gaining momentum in the recent tours, influenza hit her. Our best guess is that Tyler won’t make it this year.

At Vbet Sportsbook, the bookies’ favorite to win WSL Women’s Championship 2018 is Stephanie Gilmore (1.90). To avoid disappointment, you should also bet on the top female surfers like Lakey Peterson (2.30) and Tatiana Weston-Webb (14.00) too!