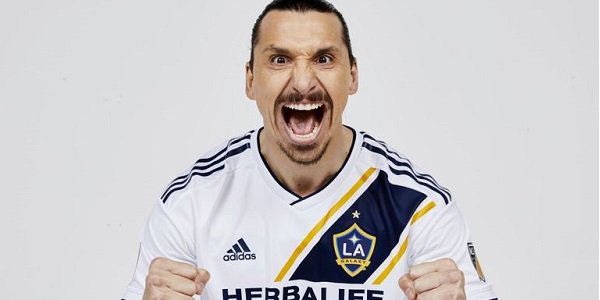 Last Friday, The Los Angeles Times featured a full-page ad that was almost entirely empty except for the words at the top.

That simply read, “Dear Los Angeles, you’re welcome” – keeping in true Ibra style. The bottom of the ad featured Zlatan Ibrahimovic’s signature, as he announced his switch from European football to the MLS (Major League Soccer).

Move to America signals that retirement is around the corner

According to online sportsbook news in the US, Manchester United and Ibrahimovic decided to mutually terminate the remainder of his contract, after a disappointing comeback from injury saw him make only 7 appearances this season, in which he scored a solitary goal.

Ibrahimovic highlighted that he opted for a move to the MLS, instead of going to play in China or the Middle East, due to this being the right time in his life for him to help out the East coast club. LA Galaxy signed him on a two-year contract worth $3m ($1.5m per year).

“I’ve decided to sign with Galaxy because I think it’s the right place for me. I think I have a lot to give, I can help them a lot. It’s the best team in the US. There are no doubts,” stressed the 36-year-old striker.

Man United on the other hand expressed their gratitude to the Swede for his 18-month service with the club. “Everyone at the club would like to thank Zlatan for his contribution to the team since his arrival and wishes him well for the future,” said a statement by the Red Devils.

At his age, Ibrahimovic is flying sky high

Ibrahimovic joined the Old Trafford side in the summer of 2016, after leaving PSG where he had spent four seasons prior and had bagged an incredible 156 goals in all competitions. It’s no secret that he decided to sign for Man United at the time because his relationship with Jose Mourinho – the pair enjoyed a great understanding while they were player and manager at Inter, respectively.

In his maiden season with the Man United, the talismanic striker found the back of the net 17 times in the top flight of English football – a feat that some forwards that have been playing in the Premier League for years still cannot achieve. Overall, he scored 28 goals in his first year, however his season was cut short due to an injury that sidelined him out of action for the Europa League final which Man United won against Ajax.

Ibrahimovic made 53 apps for Man United, scoring 29 goals. (Photo: 101greatgoals)
This trophy – a European title – gives Ibrahimovic at least some solace, as he never won the Champions League in his career, which has been illustrious nonetheless. The Swede is one of the rare players to have won national championships in four different countries – the Netherland, Italy, Spain and France. Countless other trophies have also been claimed by him throughout the years, which brings his total haul to 31 medals.

We can easily predict more success for the imposing Swede with online sportsbooks in USA during his adventure with LA Galaxy, perhaps even breaking a few records along the way.