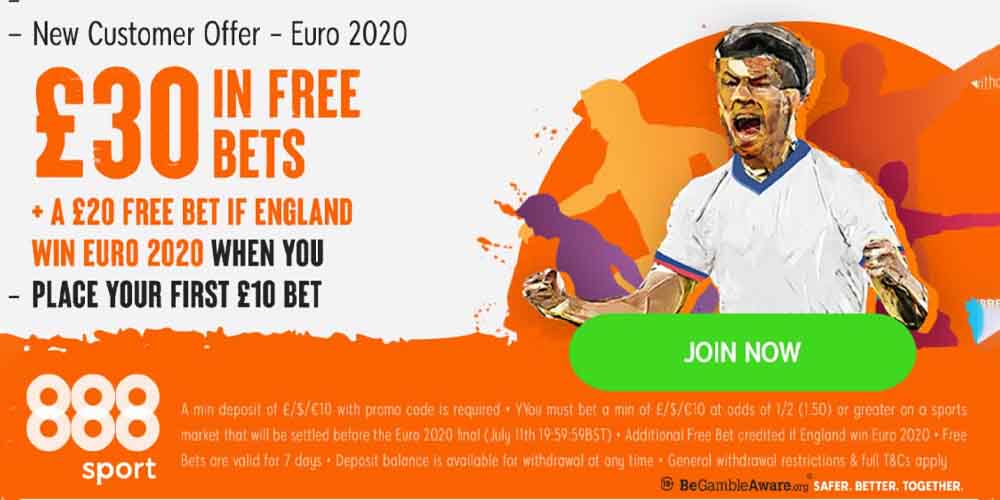 Only the final is left from the Euro 2020 tournament where England will meet Italy in the legendary Wembley Stadium. Gareth Southgate’s men got to the final for the first time in 55 years. Then the English team won the 1966 World Cup against West Germany. Which is still the only title of the country. Now the fans are hoping for another success and the first European title of England. But surely it won’t be an easy job against Roberto Mancini’s superb team which got to the final also undefeated. To celebrate this historical final, 888sport offers for all new customers a special Euro 2020 final promo with the following simple rules.

One of the biggest

, 888sport wants to reward all their new customers with this special promo. Of course, their existing customer can also make a bet for the game. With the odds of 2.60 for the English and 2.95 for the Italian victory. It is promised to be a tight game between the two squads. The two countries met each other last time in the Euro 2012 quarter-final where Italy won on penalties.

The final on Sunday can go to extra time and penalties again, just like the two semi-finals did. Where Italy defeated Spain 4-2 after a 1-1 normal time result, while England also needed extra time to get the winning goal against Denmark. Harry Kane, Raheem Sterling and the defenders were great so far, just like almost every Italian player. From Lorenzo Insigne to Giorgio Chiellini. Hopefully we can see a great final on Sunday where you can also get some free bets as rewards from 888sport.