Serbia take on Switzerland in the final fixture of Group G. It is likely going to be the decider between which of the two nations goes through to the knockout stages of the World Cup. If we see Serbia win the match, they will most likely advance to the round of 16. The same is true for Switzerland, who have previously made it to the knockout stages before. In the 2018 Russia World Cup, Serbia, Switzerland and Brazil were all in the same group. In Qatar, they are in the same group again, although Serbia will be looking to advance this time, instead of Switzerland. 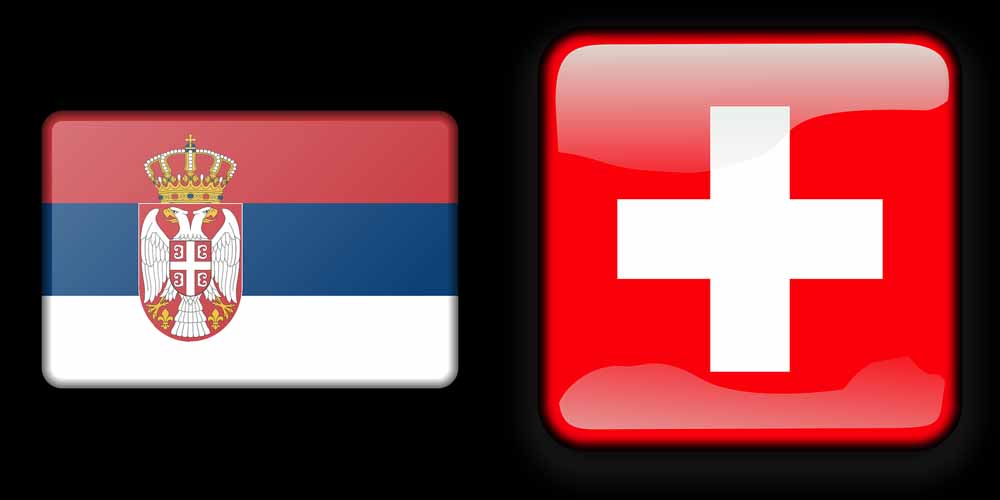 One of the most exciting games in the group stage of the 2022 Qatar World Cup is found in Group G. Serbia take on Switzerland in the final group stage match. In this article, we look at Serbia v Switzerland World Cup odds as both nations have a chance of advancing to the knockout stages of the tournament.

Group G is the so-called ‘group of death’ as it features Brazil, Serbia, Switzerland and Cameroon. It is almost guaranteed that Brazil will advance to the knockout stages. However, that gives all three teams a chance to battle out the ‘best of the rest’ spot for second. The team that finishes second in the group will advance to the round of 16.

Will ‘The Eagles’ Advance to the Knockout Stages?

The Serbian national team are going through the so-called ‘golden generation’ of talent. Dragan Stojković, the head coach of Serbia, has picked a team full of exciting stars and talent. His team is captained by the Ajax talisman Dušan Tadić. It also includes the national sides leading goal scorer, Aleksander Mitrović, who has scored 50 goals for the national side.

Serbia will be looking to qualify for the knockout stages of the World Cup tournament for the first time. They were beaten 2-0 by Brazil in the first fixture but it is expected that Brazil will beat all of the sides in this group. This gives Serbia the chance to finish second by beating Cameroon and Switzerland.

In this golden generation of Serbian talent, the likes of Sergej Miliković-Savić from Lazio, Dušan Vlahović from Juventus and the centre-back Nikola Milenković from Fiorentina all appear. A special mention goes out to the Serbian goalkeeper, Marko Dmitrović, who plays for Sevilla, as he shone against Brazil. It appears that the Serbian national team will have a good chance of reaching the round of 16 for the first time at the 2022 Qatar World Cup.

Can Switzerland Beat the Serbs?

The team that has a slightly higher chance of advancing to the knockout stages of the tournament is Switzerland. The ‘A-Team’ impressed in their opening match against Cameroon, defeating the record five-time Afcon winners 1-0. Representing the Swiss team, the likes of Granit Xhaka and Yan Sommer spring to mind.

Switzerland will fancy their chances of qualifying to the knockout stages of the World Cup. In the Russia 2018 World Cup, the team was drawn in the same group with Brazil and Serbia. Switzerland finished the group with five points, qualifying in second place. They drew with Brazil 1-1 courtesy of a 50th minute Zuber equalizer. In the second fixture, Switzerland defeated Serbia 2-1 following a 90th minute winner from Shaqiri.

If Switzerland advance to the knockout stages of the tournament, they will most likely have to beat Serbia. It is also possible that a draw will get them through, but it depends on what happens in the other fixtures. Switzerland go into the final fixture of Group G as historical favourites to beat the Eagles.

The Serbian v Switzerland match will be the final group stage game of the 2022 Qatar World Cup. The expected outcome predicts that Switzerland will find a way to beat Serbia to the second spot. This would see the Swiss national team go through to the round of 16.

According to online sportsbooks in Qatar, Serbia have been tipped as favourites to win the match. The odds of Serbia to win the fixture are 2.5 times at 22Bet. This means Serbia are the bookies’ pick to win the match, as Switzerland have odds 2.81 times to win. A draw between the two nations would pay 3.3 times.

In these types of games, it is sometimes difficult to predict the outcome of the match. The game is set to be an exciting fixture but can realistically go either way. Thus, it may be better to place bets on other lines, such as goals or team and player props.

Sometimes it is difficult to predict the scores or outcomes of the match. For instance, we believe that this match will end up as a draw. However, betting on a draw is not the most enjoyable. Thus, we would advise placing a bet on one of the teams winning and a draw. If you were to bet on Serbia to win or a draw, the odds would pay out 1.46 times. A bet on Switzerland to win or a draw pays out 1.54 times. If you bet on either Serbia or Switzerland to win (no draw), the odds are 1.35.

To close up on the Serbia v Switzerland World Cup odds that are provided by 22Bet, it may suit you best to bet on team or player props. This includes betting on the number of yellow cards a team may accumulate, which player will score a goal and so on.

Our tip would be to bet on Serbia to win or draw. The odds of 1.44 are fairly decent and both a win for the Eagles or a draw would pay out. This gives you two of the possible three outcomes as a winner. The only way that the bet would fail is if Switzerland win the match. If you are still unsure what to bet on, have a read through the ultimate World Cup betting guide as this could sway you towards picking a winning bet.