Group G is one of the most exciting groups and has also been known as the 'group of death'. It features big teams like Brazil, Serbia, Switzerland and Cameroon. In the final fixture of the group, Brazil take on Cameroon. It is known as the best team against the worst team of the group. According to the online bookies, this is an easy win for Brazil, as Cameroon are practically written off completely. However, as we all know, in football nothing is certain. We take a look at both teams and how they stand for the Group G fixture. 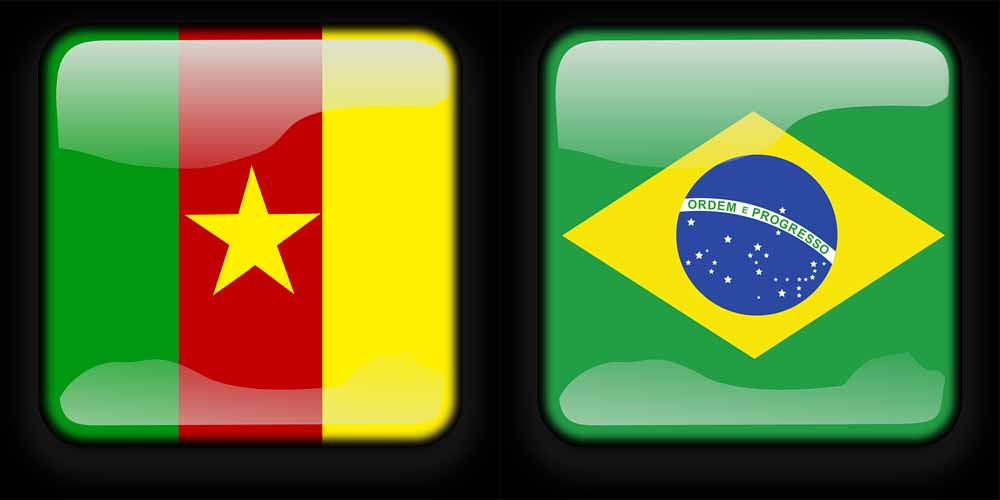 In the final fixture of Group G, Cameroon will face Brazil, who are one of the favourites to win the 2022 Qatar World Cup. The Brazilian team will be looking to add to their record five World Cup trophies. The Cameroon v Brazil World Cup bets predict an easy match for the Brazilian national side. We take a look at the most popular betting lines here.

One of the most exciting groups in the 2022 Qatar World Cup is Group G. It features Brazil, Cameroon, Serbia and Switzerland. In the build-up to the World Cup, Brazil were tipped by bookies and fans to win the competition. There has not been any change in that logic as the Brazilian national team have frightening talent across the pitch. As for Cameroon, the five-time Afcon champions will need to muster all of their fortune to get anything out of the match against Brazil.

Five-Time Afcon Winners to Cause a Surprise Upset?

The big question on many Cameroon fans’ minds is whether ‘Les Lions Indomptables’ can cause a big upset. It would not be beyond question but would be incredibly unlikely. Mind you, as we have already seen in the 2022 Qatar World Cup, surprise results have already appeared in the tournament.

Cameroon will place a majority of their hopes on the shoulders of Vincent Aboubakar. The striker is the current captain of the team and plays for Saudi Arabian side Al-Nassr. Currently, Aboubakar has an impressive 92 appearances for Cameroon and has scored 33 times. He is likely going to play up-top alongside Eric Maxim Choupo-Moting, who plays for Bayern Munich. The forward also has an impressive return of 19 goals in 70 international appearances.

There is a chance that Cameroon give Brazil something to think about. They have an incredibly powerful team with workhorses like André-Frank Zambo Anguissa of Napoli. The midfielder encapsulates the power and determination that is found in the Cameroonian national side. Although they lost their opening fixture to Switzerland, Cameroon have a chance of qualifying should they steal a result against Brazil.

Although the fairytale of Cameroon defeating Brazil is a fantasy, the likely result is for Brazil to make easy work of them. The Brazilian national side are favourites to win the World Cup and to beat Cameroon. In fact, following their 2-0 win against Serbia, Brazil have been backed to win every single game in the tournament. That includes beating Cameroon.

If you were to look at the Brazilian 26-man squad, you would be impressed. The team is packed with talent from the bottom to the top. They even have both of the best goalkeepers in the English Premier League. In addition, the likes of Casemiro, Rodrygo, Vinicius Junior, Neymar, Gabriel Jesus and Martinelli all feature in the side.

If you think that Brazil will win this match, chances are, you are correct. The Brazil team were easily the better team in the opening fixture of Group G. They rounded off Serbia 2-0, courtesy of two Richarlison goals. In the final fixture of Group G, Brazil are arguably facing the easiest team of the group in Cameroon. They will fancy their chances of finishing the groupstage with a win and advancing to the round of 16 in top spot.

When looking at the most popular betting lines for the Cameroon v Brazil fixture in Group G, there are several that come to mind. The most popular bet is to back the bookies favourite, Brazil. The Brazil national team have been tipped to win with odds 1.20. If you were to bet on Cameroon, the payout is 13.5 times your stake. A bet on a draw would pay 6.65 times your bet.

It is quite obvious that 22Bet and other online sportsbooks in Qatar would see Brazil win the match. The odds of both teams scoring is 2.36, although it is a given that Brazil will score. A bet on over 1.5 goals pays 1.16 whilst over 2.5 pays 1.59.

If you were to place a bet on Brazil to win but Cameroon to score, the odds will increase to an impressive 3.1. This is a good way to get the odds up, considering it is almost a guarantee that Brazil will win.

The odds on Cameroon winning or draw are quite high. If you bet on it, you will receive a payout of 4.7 times. However, that is because Brazil winning is almost a given. It may even be the match to start placing player props.

To complete our view on Cameroon v Brazil World Cup bets, it appears that the Brazilian team are firm favourites to come out of this match with a result. The national side will not have their star player, Neymar, on the pitch. He was kicked several times in the opening match and head coach Tite has announced that he will miss the remainder of the group stages. Thus, without Neymar on the pitch, the Brazilian team will need another talisman to step up.

The fortunate thing about Brazil is that they have so much talent that there are players to step up. The team is packed with superstars that play for the best clubs and in the best leagues in the world. Brazil are surely winning this match, the only thing to bet on is the number of goals, shots, corner, team props or player props. If you are still unsure what to bet on, have a read through the ultimate World Cup betting guide as this could sway you towards picking a winning bet.