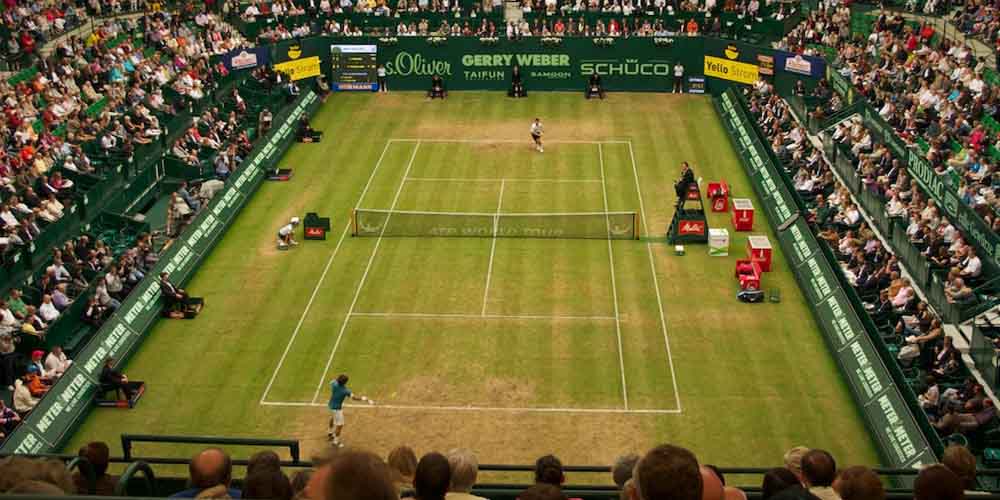 After the thrilling games of the 2021 Roland Garros, the ATP Tour continues in Halle, Germany with the Noventi Open. One of the first grass court events of the season is held between the 14th and 20th of June with several top 10 players taking part in it. Including Roger Federer and Daniil Medvedev who are both mentioned in the main favorites of the 2021 ATP Halle odds.

The ATP Tour 500 series event in Halle has been held since 1993. Now the open returns back to the calendar after last year’s cancellation. The tournament is played on four outdoor grass courts offering a great chance for players to prepare ahead of Wimbledon. So we can find several top names in the draw like the 2019 winner Roger Federer, who has won the event a record 10 times so far. But world No2 Daniil Medvedev, 2021 Roland Garros runner-up Stefanos Tsitsipas and semi-finalist Alexander Zverev will also compete this time. And aim for the €113, 785 top prize in the famous stadium which will be sadly without fans on this occasion.

Daniil Medvedev has had a superb season this year. He is mentioned as the top favorite to win this event. Online sportsbooks in Germany offer the odds of 4.98 for his victory in Halle. The Russian world No2 reached the quarter-finals in the 2021 French Open where he lost against Tsitsipas at the end. Now he can start his preparations for the second Grand Slam of the season, Wimbledon in this tournament. Medvedev won’t have an easy job though after being on the same half of the draw as Federer and Zverev. Still, his recent form and good results can motivate him for another success.

This open will be only Roger Federer’s fourth event this year after his return from last year’s right knee surgeries. The Swiss legend got to the fourth round in the Roland Garros, but he had to withdraw there. After his previous, three and a half hour match against Dominik Koepfer was too much for his knees. Hopefully, he can play fully recovered in Germany now. His odds to win his 11th title is 5.25 according to the 2021 ATP Halle odds. Federer starts today against Belarusian Ilya Ivashka and can meet Medvedev in the quarter-finals if both of them get there.

Zverev, Tsitsipas and Rublev can also win the trophy

Alexander Zverev has reached the finals at the Halle Open twice before, in 2016 and 2017 but lost it both times. Now he has another chance to win on home soil. And the odds of 6.25 to do so. The world No6 played well in the French Open and got to the semi-final. Where he eventually lost against Tsitsipas. But the 24-year-old German is also having a great season so far after winning in Mexico and Madrid. The latter was his fourth Masters and 15th ATP Tour title.

Stefanos Tsitsipas will play in Germany shortly after his greatest achievement of his career. Finishing as a runner-up in the 2021 French Open. The Greek was close to winning his first Grand Slam title but Novak Djokovic performed a fantastic comeback. Now Tsitsipas can continue his amazing season after receiving a wildcard into the tournament. Online gambling sites in Germany offer the odds of 6.95 for his victory. While his possible opponent in the semi-final, Andrey Rublev’s odds are 7.50 on 22Bet. The Russian world No7 won the Rotterdam Open this March and reached the final in the Monte-Carlo Masters. While his best result here is reaching the quarter-final back in 2017.