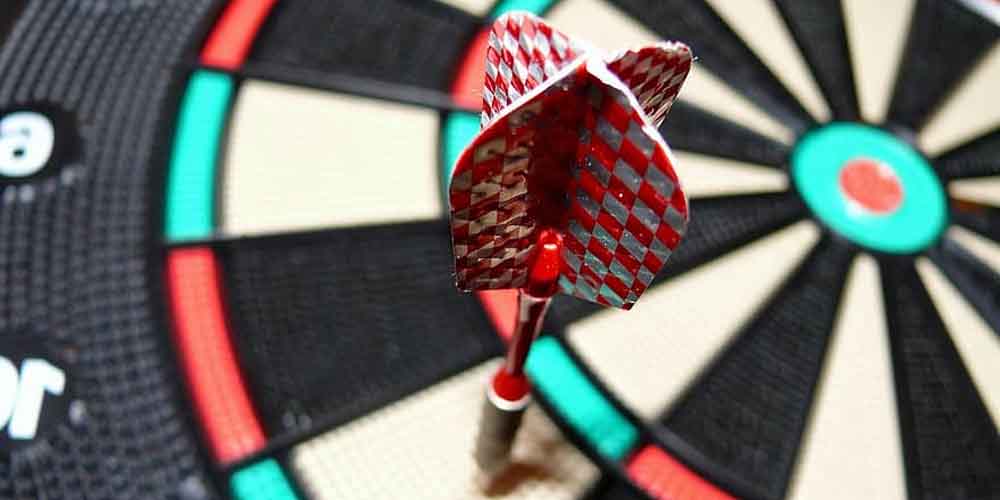 Defending champion, Peter Wright, took the title after defeating Michael van Gerwen 7–3 in the final on New Year’s Day this year. And in December, a total of 96 players will appear on the oche, to compete again for The Sid Waddell Trophy and £2.5m in prize money. 2021 PDC World Championship betting tips take a look at the tournament and this year’s favourites.

The 28th edition of the PDC World Darts Championship will of course take place at the Alexandra Palace in London, which has hosted the showpiece event every year since 2008. The world’s best darts players will be competing, and naturally, this is the one they all want to win.

The PDC World Championship is the biggest event on the darting calendar. Ninety-six players will be competing, with the top 32 ranked players in the world given a bye into the second round. The first round sees the 32 highest ranked players on the PDC Pro Tour Order of Merit – who have not qualified for the second round – take on 32 qualifiers.

Rounds 1 and 2 are the best of five sets, after which the length of matches increases as the tournament progresses. Rounds 3 and 4 are best of 7, the quarterfinals best of 9, the semifinals best of 11 and the Final is best of 13. This is useful to know when wagering, as it means upsets happen more often in the first couple of rounds. Talent usually triumphs over the course of longer matches as the tournament moves closer to the Championship decider. You’ll find plenty of 2021 PDC World Championship betting tips and odds on offer at online gambling sites in the UK, with outright markets already open for you to pick an overall winner.

The perfect game to gamble on

Until the 1970s and 1980s, darts was a sport played almost exclusively in pubs and working men’s clubs across the UK, receiving very little TV coverage. Nowadays, it is very much in the mainstream, however, after some big personalities got involved in the game. Thanks to the likes of Eric Bristow, Jocky Wilson and Bobby George, a night at the darts has become a true spectator sport, with tens of thousands also tuning in to live tournament broadcasts.

Moreover, the PDC World Darts Championship is an excellent sport from a betting perspective, some would say the best gambling event in the sporting calendar. It manages to combine all the best elements of gambling into one ridiculously entertaining event, with tension, an incredible atmosphere, and its one-and-done tournament format.

The atmosphere at the ‘Ally Pally’ has as much in common with Oktoberfest as it does a World Championship. The players are characters, each with their own nickname and signature walk-on songs, like in boxing or MMA. And the crowd is awesome, cheering 180s in the same way people celebrate sixes at the T20. A few hours into the evening, however, and it almost doesn’t matter what’s happening at the oche. Fans are too busy downing pints, singing like they’re chanting from the terraces and generally having a good time.

And with matches moving at such a brisk pace, the result is that World Championship darts and betting go hand-in-glove. This is an event that doesn’t take itself seriously, yet still ticks all the boxes a gambler could want. Accordingly, you’ll find a multitude of 2021 PDC World Championship betting tips and markets. Give the darts a go, and it shouldn’t take more than a couple of matches for you to understand why this is such a fun betting sport.

Outright betting markets open several months in advance of an event as big as the PDC Worlds. And once the tournament starts, punters can stake on the winner of individual matches. These are the two most popular markets for darts betting. With live betting now commonplace, however, many 2021 PDC World Championship betting tips and markets also open, giving punters plenty of other options. And as with any sport which involves point scoring, a lot of these revolve around numbers.

Leg/Set Handicap betting is popular when strong favourites are playing, as punters can get longer odds. For example, if you bet on Michael van Gerwen to win a match with a -2.5 Leg Handicap, he would need to win the match by at least three legs for the bet to be successful. A 10-7 victory for van Gerwen would win the bet, but a 9-8 victory would lose.

With Leg/Set Over/Under betting, punters must predict whether a player will win over or under a specified number of legs or sets in a match. For example, if you bet on Peter Wright to win Over 4.5 legs in a match, the bet pays out if he wins five or more. With Handicap and Over/Under betting, the player you bet on is not required to win the match. They only need to meet the requirements set for the bet to be successful.

Many other elements of the match are also available to bet on, such as the number of 180s, whether either player will achieve a nine-dart finish (a 501 score with their opening nine darts), and how many legs or sets the match will last. You can also wager on the exact score in a match or the winning margin for either player.

Current odds at the 1XBET Sportsbook:

So who are the top contenders to lift the silverware on Year’s Day 2021? If you’re reading this, you’ve probably heard of Michael ‘MVG’ van Gerwen or ‘Mighty Mike’. Currently World Number One, the Dutchman has established himself as one of the sport’s all-time greats. Aged 17, he won the 2006 World Masters and threw a televised nine-dart finish at the 2007 Masters of Darts, becoming the youngest player ever to do either. He is now the second most successful player in PDC history, behind Phil Taylor.

The current World Champion is Peter ‘Snakebite’ Wright. Wright’s colourful get-ups are the stuff of legend, and he’s known for his mohican hairstyle which changes colour with every tournament – created by his hairdresser wife. His nickname, ‘Snakebite’, is derived from the designs his wife uses, and not from the snakebite drink. “I just like snakes”, he says.

Third favourite this time around is Gerwyn ‘The Iceman’ Price. The former rugby union and league professional has now firmly established himself in his third professional sport. Having made his World Championship debut less than a year after joining the circuit, his biggest win to date came with his first televised title at the 2018 Grand Slam of Darts. 12 months later, he went on to successfully defend the title with a string of sensational displays.

You can read more about the coming tournament here PDC 2021 Betting Odds. And come December, be sure to check out online Sportsbooks in the UK to find 2021 PDC World Championship betting tips and markets when the action finally begins.