6 Most Memorable El Clasicos in the Past Years 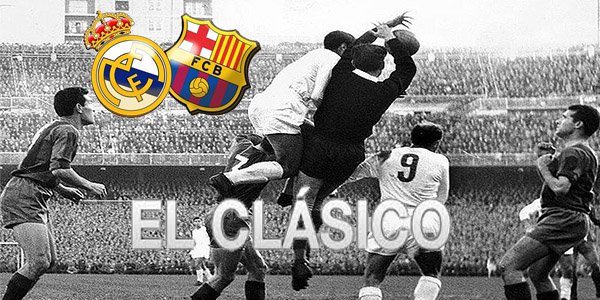 Clashes between Real Madrid and Barcelona are always expected to bring great spectacle, but some of them were truly unforgettable.

The two greatest teams in Spanish football, Real Madrid and FC Barcelona are meeting each other again on Sunday, 22 March. Los Blancos and the Blaugrana have faced each other only once so far this season, in the 9th round of La Liga. The capital side won that game but are underdogs for the upcoming clash, according to mobile betting sites.

A great spectacle is expected from the game as both teams are full of incredibly skilled and talented players like Messi, Ronaldo, Neymar, Bale, etc… In addition, the arch-rivals have played some quite fascinating matches in the past, of which we collected the most memorable ones.

The two sides have faced each other for the first time in this season on 25 October, 2014. The Royal Team was in a winning streak of 8 games that run up to 22 until Valencia have stopped them. The Catalan team were thought to be able to stop the amazing form of Galacticos but they eventually failed.

Luis Enrique’s men took the lead by a perfectly placed shot from Brazilian star Neymar Jr. Carlo Ancelotti’s side, however did not surrender. Cristiano Ronaldo equalized in the 35th minute from penalty and in the 50th minute, perfect header from Pepe turned over the game. Benzema scored the last goal of the game in the 61th minute, setting the final result of 3-1.

Real Madrid was leading by 4 points against FC Barcelona and were about to increase their advantage. However, the Blaugrana scored an early goal in the 7th minute after Iniesta’s strike. Karim Benzema managed to equalize in the 20th minute and only 3 minutes later the Franch striker scored again.

Lionel Messi scored Barcelona’s second goal shortly before the end of the first half time so they went to rest with 2-2. Cristiano Ronaldo was given a controversial penalty in the 55th minute which resulted in a goal, but 10 minutes later Sergio Ramos was sent off and Neymar was given a penalty after the referee’s next strange decision. Messi equalized again and the Catalan side was awarded another penalty in the 84th minute which has set the final result at 3-4 with Messi’s penalty.

The two Spanish giant have also faced each other in the Copa del Rey final in 2014. Before that, they played 6 Spanish Cup finals against each other and each team won 3 times against the great rival. This was the 7th El Clasico in the history of Copa del Rey finals, according to online gambling sites in Spain.

Los Blancos started better as Angel Di Maria took the lead in the 11th minutes. There were no more goals until Marc Bartra headed the ball perfectly into the net. The last 10 minutes became unforgettable. Gareth Bale scored an amazing goal in the 85th minute which gave his team the title, but Neymar had the chance to equalize, however, he hit the post in the end of the clash.

Jose Mourinho’s first El Clasico did not really go as the Portuguese manager expected. His team was in superb form in the league and visited Pep Guardiola’s wonder team undefeated. In addition, Galacticos were regarded as favourite for the encounter, which makes the result even more shocking.

Mourinho’s men were outclassed, like they didn’t even know what was going on. Xavi scored the first goal for his team and then Pedro was the next one to put the ball into the net. Then David Villa punished faults of the defenders twice and Jeffran scored the last goal. Sergio Ramos was sent off in the end of the game as he couldn’t bear the humiliating defeat.

The reigning Real Madrid coach was Juande Ramos after sacking Bernd Schuster. The Royal Team was out of the Champions League and the Copa del Rey but were performing great in the league, hence great expectation surrounded the clash between the two rivals, according to Spanish gambling news.

Gonzalo Higuain took the lead for his team after 13 minutes of playing but Barcelona managed to overcome the disadvantage. Thierry Henry equalized 4 minutes later and in the 19th minute the result Barcelona were already leading. Messi scored the last goad in the first half, while the second half started in a similar way to the previous one. Sergio Ramos scored in the 55th minute but Henry, Messi and Pique responded to it respectively, setting the final result at a humiliating 2-6 in Real Madrid’s own stadium.

In 2007/08 season, Real Madrid hosted their great rival after securing the championship title for themselves, for which Barca players started the game by honouring the league winner. During the game, Galacticos proved themselves to be worthy of their triumph as they showed Royal performance throughout the 90 minutes.

Raul scored first in the 13th minute, and Arjen Robben doubled the advantage 7 minutes later by a header. Argentine striker Higuain changed the scoreboard to 3-0 just 2 minutes after being substituted. Ruud van Nistelrooy scored from a penalty and Henry finalized the result at 4-1.