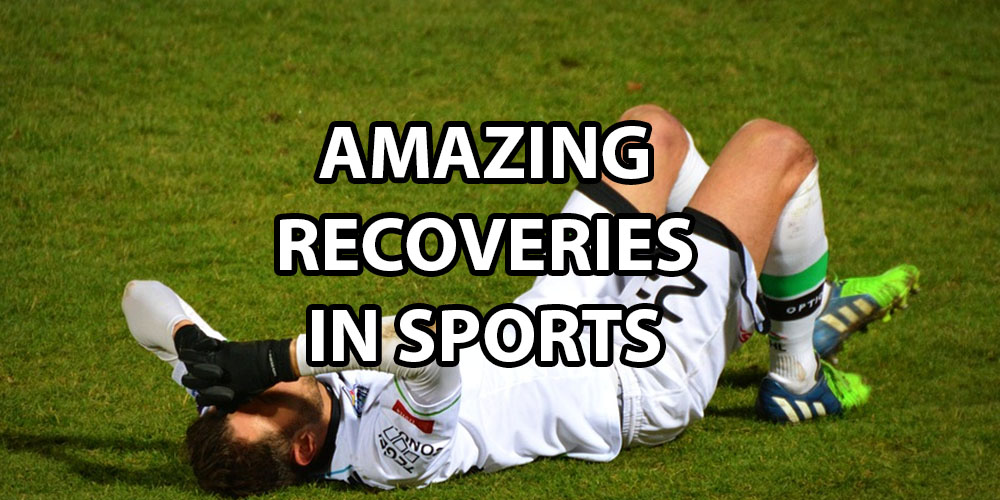 Unfortunately, injuries can happen with any athlete in any sport really. If you’re lucky, you can get away with some minor ones, but major ones can occur often too. Sadly they can cost the careers of some, but the athletes below are all great examples of amazing recoveries in sports.

We have already mentioned some of these recoveries in our greatest sporting comebacks article. Now we try to focus only on the biggest injuries and how these athletes have managed to return from them. They could all inspire us and the other athletes to believe in themselves and that anything is possible if we really want it. Of course, safe medical care and good doctors are also needed for a full recovery, but your mental state is as important as the physical one in these cases.

In 2011 it looked like Peyton Manning’s career was over after doctors suggested a spinal fusion surgery. Before that, he also underwent some neck surgeries which weren’t effective. He had the operation in September and started to train again in the same year. After he was left out for an entire season from his team, Indianapolis Colts, so he moved to Denver Broncos in the following year.

Soon he was back in his form and enjoyed four more great seasons with his new team. Manning also won his second Super Bowl in his last season, in 2016. His recovery was truly amazing in such a tough spot as the NFL, where being healthy and strong are so important. If you’re also a fan of the NFL, you can make bets on all the games at Unibet.

Winning gold with an injured ankle

Gymnasts are also in danger of serious injuries, which could happen sometimes at the worst time, during a competition. This is exactly what happened with American Kerri Strug who was the last member of the American team fighting for the gold medal in the 1996 Olympics. During her vault exercise, she landed badly and tore ligaments in her ankle. But in spite of her injury, she completed her second vault perfectly, helping the team to win. The only sad part of the story is that she couldn’t recover properly after and had to retire from gymnastics in the following year.

Another US gymnast, John Orozco was even tougher than Kerri. He tore his Achilles twice and suffered several other injuries, but he always managed to come back and continue. Orozco took part in the 2012 Olympics after winning the US Championship. He was also on the list to go to Rio in 2016, but he had to withdraw from it at the end due to another injury. Online gambling sites in the US are hoping for other American gold medals in Tokyo, with Simone Biles as a huge favorite in many events.

You have to be a tough guy and bear pain well if you’re an ice hockey player. But to deal with an injury can be a difficult task even for them. One of the best NHL players, Mario Lemieux thought that it might be the end of it when he couldn’t bend down to tie his skates. But ‘Super Mario’ got the power to return from all his diseases like lymphoma or chronic back pain. He was voted the MVP in three seasons and went on to play until the age of 41 with Pittsburgh Penguins. His old team has the odds of 13.00 to win this season, check out all the favorites on Unibet.

Another Canadian ice hockey player, Clint Malarchuk had an even more shocking return from a very scary injury. His throat was sliced by the skate of an opponent, causing him to lose a lot of blood. He was still very lucky as his team’s trainer saved him after he knew how to stop the bleeding. And now comes the shocking part, Malarchuk was back on ice four days later, in spite of the doctors’ advice to take off the rest of the season.

Online sportsbooks in the US were writing a lot about the possible return of Tiger Woods before the Tour Championship in 2018. One of the greatest golfers of all time, Woods had four back surgeries between 2014 and 2017. But when everyone thought that his career is over, he finished 9th in his first race at the Bahamas. Then he finished second in the 2018 PGA Championship and won the Tour Championship. His return was complete with winning his 15th major championships, the Masters in 2019 at the age of 43. And he is still competing, though still struggling with some injuries. Hopefully, we can see him again at the Masters in April.

Coming back from the edge of death

Lance Armstrong might not be very popular now, after his doping, but one thing we can’t deny, he is a true survivor. He made a recovery from testicular cancer which he was diagnosed at the age of 25. The doctors gave him almost no hope to survive but less than half a year later he was declared cancer-free. In the following year, he finished fourth in the Vuelta and won his first Tour after that. The rest of his story is not so amazing, let’s just leave it here.

Let’s finish with two amazing recoveries in sports by F1 drivers. Niki Lauda simply almost burnt alive in his car after he crashed out at the German Grand Prix in 1976. But even though he suffered serious injuries, he was back in his car only six weeks later. And he almost won the championship in that season, he finished second with only a point behind the winner.

Another F1 driver, Alex Zanardi had to go through similar suffering. He was racing in Indycar when his car was ripped in half in a tragic accident. It resulted in the amputation of his legs, but Zanardi didn’t give up. He was back in racing two years later, driving in the World Touring Car Championship. In addition, he also took part in the 2012 Paralympics in London and won three gold medals there. Zanardi is another great example of amazing recoveries in sports and truly inspiring for everyone.

You can discover more here at Unibet Sportsbook.