Another Wardrobe Malfunction? Here are the Best Halftime Show 2018 Bets! 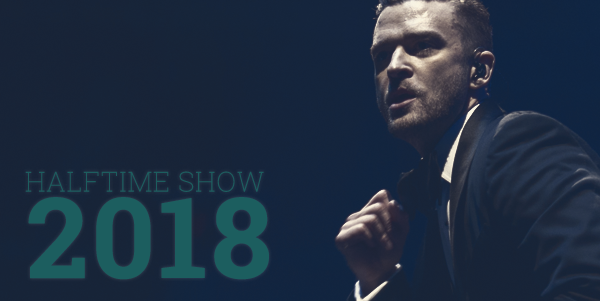 On Sunday, Justin Timberlake was confirmed to return to the Super Bowl stage, but this time, he’s headlining. There was some outrage after the announcement, but instead of riding the hate-wave, we’ll examine the Halftime Show 2018 bets from Paddy Power Sportsbook! Another custom malfunction; the return of Janet Jackson? We have Halftime Show odds for all the juicy events!

Justin Timberlake is bringing the sexy back to the Super Bowl Halftime Show stage? Now that the mandatory pun is out of the way, we can focus on the important things. Fourteen years after Nipplegate, Justin Timberlake will once again grace your screens during the halftime of the most watched TV event. Since Janet Jackson’s name was almost immediately dragged into the conversation about the upcoming performance, the level of excitement caused by Justin’s name is questionable. Nevertheless, as one would expect, Paddy Power Sportsbook has all the Halftime Show 2018 bets lined up. Do you have any Super Bowl 52 Halftime Show predictions or wishes? Then check out the list of events below and bet on the ones you’d like to come true!

Another Justin and Janet Superbowl?

The speculation about Jackson’s return to the Super Bowl stage started right after the announcement. First of all, the rumors that the legendary singer was banned from the stage are false. “Nobody is banned,” said an NFL spokesperson to Billboard. According to obscure sources close to Jackson, she wishes the best to Justin but her schedule won’t allow her to join him on stage. Another source said to ET that “if Justin or his team did reach out, Janet would perform with him again in a minute.” If you think that there’s another Justin and Janet Super Bowl moment in the making, visit Paddy Power Sportsbook and place a bet on this event, with 5/1 odds.

As it was set above, Janet’s return to the Halftime stage has a huge question mark hanging above it. Since we cannot count on her to lend a body-part for Timberlake to expose in 2018, he will have to rely on his own body. Probably, that would bring just as much joy to the world as the fiasco from 2014. Do you think that Timberlake should plan a “wardrobe malfunction”? This time, with his own nipple in the limelight? The odds for this, or another wardrobe malfunction, are 3/1 at Paddy Power Sportsbook! Support Justin Timberlake’s nipple with your bet!

The First Song at the 2018 Halftime Show

Justin Timberlake discography provides plenty of possible starter songs for the show. This time around Cant’s Stop The Feeling (5/4), Sexyback (17/10), and Rock Your Body (4/1) appear to be to be the bookie’s favorite options. Sexyback sounds like a strong choice, thanks to its catchiness, and world-wide success. Which song fits your Super Bowl 52 Halftime Show prediction?