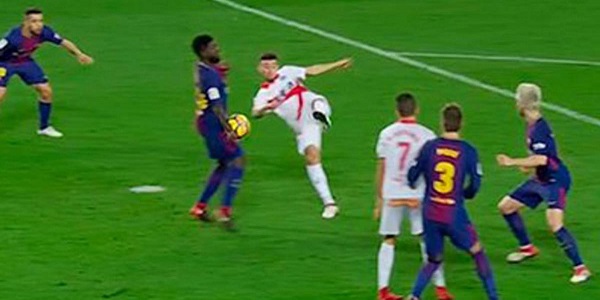 La Liga penalty records are rarely mentioned, but they seem to play a vital part in who wins the league…

FC Barcelona broke another record last night, but online sportsbook news sites in Spain seem to be quite silent about this one. It’s not really obvious why, it’s quite a historic one. Nobody has ever done anything similar in the past 46 years. Only Messi and his mates were capable of such greatness.

And what their record is? It’s a La Liga penalty record. No team was given a penalty against Barcelona in La Liga in the past 74 La Liga matches. No Barca player made a foul within the penalty area in the past 74 matches. Or at least none that was punished, if we want to be a bit more accurate, but does that even matter?

FC Barcelona hosted Deportivo Alavés last night at Camp Nou. For quite a while, it seemed like Barca are finally going to lose a few points as Alavés took the lead in the first half and kept it for longer than usual. The underdogs were even getting chances to score and at some point they thought that the La Liga penalty record will be over soon.

Umtiti happened to play handball within the penalty area, but the referee decided it was okay for him. After that in the 72nd minute, Suarez equalized, and Messi won the game with a 84-minute score. It wasn’t enough for fair player Luis Suarez, who kicked an opponent in the belly in the 86th minute of the game. No punishment at all, obviously.

Obviously not, according to the La Liga betting odds in the online sportsbook directory. Barcelona is by far the strongest team in La Liga this season, which is quite a thing as Sevilla, Valencia, Atletico and Villarreal are pretty good this season, and of course as always, there is Real Madrid.

Yet none of them seems to be capable of stopping Messi and his partners in the race towards winning La Liga. And even if a team seems to be good enough to beat Barca, then the Catalans receive some exterior help – luck is always with the ones who deserve it more, right? Right. And who would deserve the referee’s help if not the Blaugrana?

However, you shouldn’t expect too good odds. The La Liga penalty record holders have 1.01 odds to win La Liga 2018. Betfair Sportsbook gave 114.00 odds for Real Madrid to win La Liga, and they regard Atletico as the biggest challenger: their odds to win the league are 62.00…

Who will win La Liga 2018? Can anyone stop Barcelona this season? Are they actually as good as they seem to be? Do you think they will be dominating the Champions League as confidently as they dominate the Spanish league as well? We’ll see soon, till then, make your La Liga betting predictions!