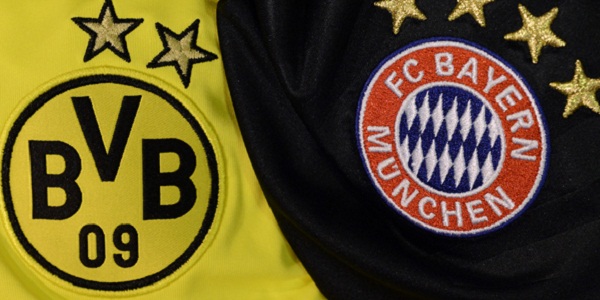 Our goal is to surprise you with the best Dortmund v Bayern betting tips for the German football derby of the weekend. Let’s see where you can find the best odds to bet on Bundesliga!

La Liga is not the only domestic league to host a terrific encounter between two great teams this Saturday: just before the Derbi Madrileno, we will also be enjoy the match among Germany’s two best teams: Borussia Dortmund and Bayern Munchen. However, BVB are only 4th in the league at the moment, I don’t think it’s too wrong to name them as Germany’s second best team in recent times. Great battle ahead of us, let’s see what online sportsbooks in Germany expect from the game and let’s see what the best Dortmund v Bayern betting tips are!

…but then again, they always are when it comes to German Pokal Cup or Bundesliga. In the past few years, the Bavarian side has been clearly dominating the German domestic league and this season is expected to bring the same results as the previous ones: easy victory for Bayern Munich. However, few derbies might make their achievemnts a bit harder. Dortmund is one of the few teams who could be capable of stealing a few points from Carlo Ancelotti’s men.

Needless to say, online sportsbooks don’t expect that to happen any time soon. The odds for Bayern to win are quite high for the upcoming derby. Bet365 have rated their victory at 2.10 (11/10). The best odds for Dortmund to beat Bayern are available at Betfair. They’d pay 3.50 (5/2) times your stake, should BVB win. The draw goes at (13/5) at BetVictor.

Bet on Lewandowski to triumph against his former team

Robert Lewandowski is one of the best strikers today. He used to play for Borussia Dortmund but he left them for the sake of Bayern Munich. Now he is expected to deliver the goals for his team on Saturday evening. The odds for Lewandowski to score against Borussia Dortmund are 2.30 (13/10) at 32Red. Robben has pretty good odds too, but you should avoid those: he is surely not going to score as he is out due to injury. Betting on Reus or Coman would also be a bad idea because of similar reasons, but the 2.70 (17/10) odds for Aubameyang to score seem pretty tempting at Bwin.

Those who seek bigger prizes and want to deny the fact that it is going to be an exciting battle between two great teams, might immediately think bigger and bet on hat-trick heroes. The odds for Lewa to score 3 against his former team are 121.00 (20/1) at Bet365, while Muller’s odds to score a hat trick are 51.00 (50/1) at Ladbrokes. If oyuré a huge fan of Aubameyang when it comes to betting, you can wager on his night for 29.00 (28/1) odds at Betway. Don’t miss out on a great evening of awesome odds!