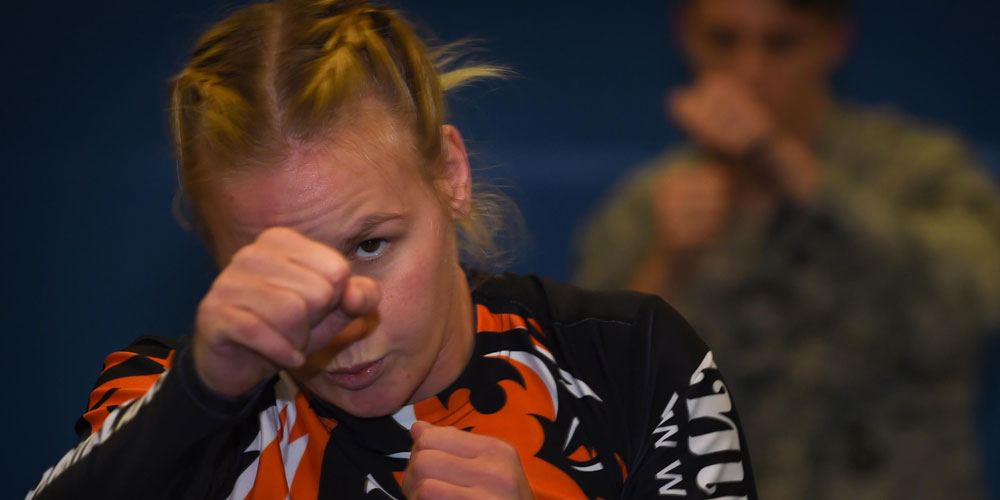 Amanda Nunes, Valentina Shevchenko, and Rose Namajunas are the best UFC female fighters of 2019. Let’s see what they’ve achieved during their successful career.

Women’s Bantamweight and Featherweight Champion, Amanda Nunes is the best active UFC female fighter in the world. Amanda is 30 years old and she is from Brazil.

Currently, she is the only female fighter with 2 titles. She has 4 losses and 17 wins in her carrier, 12 of them by knockout. Her most famous victory was against the former champion Ronda Rousey (the most famous female fighter) on Dec 30, 2016.

Ronda Rousey is no longer a UFC fighter which is the only reason she is not in our short list. She lost only 2 fights in her carrier: once against Holly Holm and once against Amanda Nunes. Ever since Amanda is the Women’s Bantamweight Champion in UFC.

Amanda looked much more dominant against Rousey compared to Holm. She won the fight with a TKO by heavy punches within 48 seconds. Ever since Amanda Nunes won all her fight with knockout except 2 fights against her tough rival Valentina Shevchenko. She won both fights in the last round by split decision and still is Women’s Bantamweight Champion in UFC.

Amanda’s life as a martial artist started at the age of 5 by practicing karate. At sixteen, she started practicing Brazilian Jiu-Jitsu under Ryan Franco, a Brazilian jiu-jitsu black belt holder. Her first professional MMA started on March 8, 2008.

At number 2 in this list, we have the new Women’s Flyweight Champion, Valentina Shevchenko from Kyrgyzstan. She is 30 years old and is one of the most talented fighters in UFC.

Valentina has 3 losses and 16 wins in her carrier, 7 of them by submission and 4 by knockout. Her most famous victory was her last fight against Joanna Jędrzejczyk, the former UFC Flyweight Champion. She defeated Jędrzejczyk by unanimous decision in the last round on December 8, 2018, and was announced the new champion.

Joanna Jędrzejczyk was the former Women’s Strawweight Champion and Flyweight Champion. She lost both titles to Rose Namajunas and Valentina Shevchenko respectively which is why she is not in our list.

Valentina Shevchenko and her older sister became interested in fighting sports at a very early age. Valentina started her career with practicing taekwondo at age 5 and later she branched out into kickboxing. The nickname “Bullet” was given to Valentina by her kickboxing trainer after she knocked out a 22-year-old opponent at age 12.

Valentina’s older sister, Antonina Shevchenko is fighting in the same class weight in UFC. By winning 7 fights and no losses, she is ranked #15 in the official UFC rankings.

At number 3 in our list, we have Women’s Strawweight Champion, Rose Namajunas from America. Rose with 26 years of age has 3 losses and 9 wins in her carrier, 6 of them by submission and 2 of them in the 1st round.

She lost one shot at the title in 2014 by submission against Carla Esparza, but her best fight came in 2017. Rose Namajunas defeated former Strawweight Champion Joanna Jędrzejczyk by TKO with heavy punches in the first round.

Later she defended her title against Jędrzejczyk on April 7, 2018. This time it took to the last round when she won by a unanimous decision and remained Champion.

Jessica is ranked #1 in UFC women’s strawweight class and has more experience in this field than Namajunas. I believe Namajunas is going to win this fight since she won 2 times against Joanna Jędrzejczyk. But Jessica Andrade lost her fight against Jędrzejczyk on May 13, 2017.

Rose Namajunas also started her career with taekwondo at age 5. She grew fast in martial sports and achieved junior black belt at age 9. Later she branched out into jiu-jitsu and kickboxing at the age of 16.

She started fighting in MMA fabulously in 2010 by winning 4 fights in order with 2 wins by TKO. Namajunas entered Ultimate Fighting Championship in 2014 and was given a shot at the title in her first fight due to her high rank.