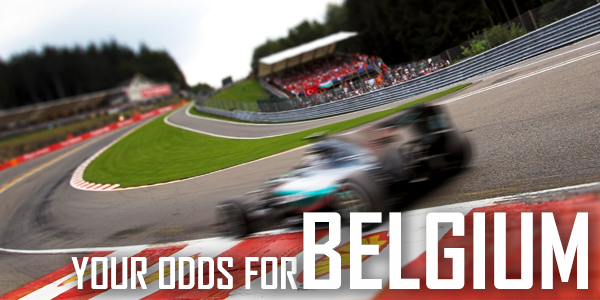 The new owners of Formula One are attempting to reach a younger audience but Ferrari are sticking with an old hand, although it remains to be seen if Kimi Raikkonen’s new contract will see him settle down and beat the 10/1 odds he’s getting to win the Belgian Prix because if you’re going to bet on Ferrari in Belgium you really ought to back Sebastian Vettel.

Back from their summer holidays checking on their tax haven homes and pretending “testing” isn’t an excuse to spend a week somewhere fun with quite as much of a circus as the F1 usually attracts, the highest echelons of go-kart racing are back for the traditional blast around the Spa-Francorchamps circuit, a track dripping with history and atmosphere. If you’re fond of placing the odd bet on sports in Belgium this should be a cracking race and a bet on Ferrari in Belgium is one for a fascinating season.

Sure, you could back Lewis Hamilton to win, he’s the favorite at sites like Bet365, but with the psychological advantage Vettel took into the break, finishing the first half of the season some 14 points clear of Hamilton, a bet on Ferrari in Belgium isn’t that daft an idea, and those 4/1 odds on Vettel are not to be scoffed at. Indeed if there is scoffing to be done this week over Formula One it is the new owners trying to be “down wiff da kidz” and attract a younger audience to their overly technical sport.

Place A Bet On Ferrari In Belgium This Weekend At Bet365

From this September there will be an official eSports branch to the F1 tree. Played on the new F1 incarnation for PC, Xbox One and Playstation 4, there will a qualification period to whittle it down to the top 40 drivers, ground down even further in October at the semi-finals in London, till the top 20 will meet for a three race extravaganza of a final in Abu Dhabi this November. This means that scoff or not one day you’ll probably be able to bet on Ferrari in Belgium despite it all just being virtual reality.

A survey recently noted that 14% of Americans over 13 are fans of professional computer gaming and the eSports global market seems to have acquired a value of some $695m set to rise to a staggering $1.5 billion by 2020. Whether Belgian gambling laws can keep up with this expansion into digital competitions is debatable, but a bet on Ferrari in Belgium this weekend is one day going to seem just a little old hat. The owners of Formula One might see it just as marketing, but there are bigger dangers.

Are eSports The Future Of Motor Racing?

Accidentally creating a more accessible, less dangerous, just as interesting version of your own sport that reaches a much bigger audience is possibly the daftest decision yet made by F1 execs, although it’ll take a few years for the stupidity of this one to sink in. Lucky then that Kimi Raikkonen has got a few more years with new contract to keep him in the driver’s seat through till the end of 2018, so a bet on Ferrari in Belgium doesn’t HAVE to be on Sebastian Vettel. Although it probably is the sensible choice.

Bet365 give Hamilton 4/6 to win with Vettel at 4/1, Valtteri Bottas at Mercedes gets 7/2 with Kimi on 10/1 with the two Red Bull drivers further back. Max Verstappen gets 22/1 with Daniel Ricciardo a superb podium finish bet getting 11/4 to be on the rostrum come the end. Chances are, however, that Belgian gambling news headlines won’t be crowing over a surprise victory for anyone at Spa and it’ll be a straight out duel between the top of the table and so a bet on Ferrari in Belgium is no bad wager at all.