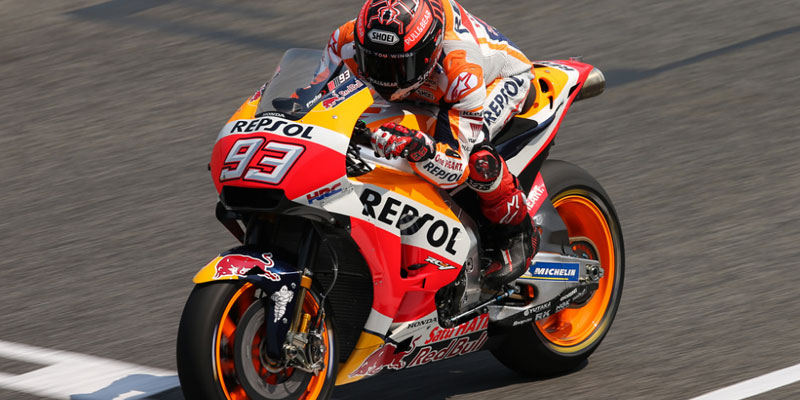 The betting odds on Marquez to win MotoGP 2019 show that bookies expect the Spaniard to defend his title. However, he’s still not 100% fit after his surgery this winter. If he drops points in the first few races, that could let the likes Dovizioso and Rossi to build a momentum. Anything’s possible this year, but we’ve made our predictions and collected the best MotoGP 2019 odds for you.

MotoGP is the highest class of all motorcycle road racing championships. The first official season took place in 1949, and has been organized annually ever since. The riders have to compete in 19 tracks around the world. In each race, the best 15 riders are rewarded with points, which they can collect throughout the season.

The winner of each race gets 25 points, while the second place is rewarded with 20. Whoever gets the most points by the end of the year becomes the MotoGP World Champion. In 2019, the season started in the 10th March, at Losail, Qatar. The last race takes place in Valencia, on 17th November.

Just like in the case of other sports, it’s possible to bet on MotoGP races as well. According to our latest review about Bet365 Sportsbook, they’re a site with a great variety of bets, and that includes motorcycle road racing as well. While it’s never easy to place bets on MotoGP, this year’s going to be especially exciting. But don’t worry: we’ve got you covered, and collected the best MotoGP 2019 odds for you.

The betting odds on Marquez to win MotoGP 2019 show that the five times World Champion is the favorite to win this season as well. Online sportsbook sites in the UK argue that the Spaniard should win by miles, and they’ve got a good reason for that. Last year he’s managed to outclass everyone by reaching 321 points. Furthermore, his Honda bike incredibly strong, it probably has the best attributes of all cycles in the championship.

However, Marquez had an important surgery this winter, and that could determine the first part of his season. He claims that he had to work 5 hours of physio per day to get in the best shape possible. If he’s not a 100% by his first few races, that could cost him important points. If he can’t deliver the best results in the first couple of rounds, that could give the likes of Dovizioso and Rossi a chance to build a momentum…

Dovizioso could be in the mix with showing more consistency

Bet365 Sportsbook argues that Andrea Dovizioso could be the rider to challenge Marquez the most this year. The Italian started last season very well, but managed to drop points in Spain, France and Catalonia by not finishing those races.

Dovizioso is a big name in MotoGP, however, he hasn’t won a title yet. He’s already in his 30s, so this year could be a now or never for him. He’s got the bike, he’s got the experience, he’s got the ability. The one thing he lacked last year was consistency. He missed out on the podium 9 times in 2018, and you can’t let that happen if you’re in a title challenge. This year, he’s going to give it another go, being a year older and wiser. We believe he’s got everything to make this year a bit more nerve-wracking for Marquez.

Rossi still feels the hunger to get his 10th title

Bet365 Sportsbook predicts Valentino Rossi to finish 3rd this season. Nobody can accuse him with not picking up the important points last year. The Doctor finished 3rd in the Championship with not winning in a single track last season. However, he did manage to complete every single race in 2018.  It was only Argentina and Malaysia where he couldn’t collect a single point from.

The legend has turned 40 this year, and he claims that he still feels the hunger to achieve great things in this sport. His experience and calmness – paired with his incredible motivation – could definitely make him challenge for his desired 10th title.

“[Winning 10 titles] is a dream that I still believe a lot in, but it’s also a big regret, because I deserved it. I lost two titles in the last race, and I’ve also been runner-up many times, so my career deserved 10 titles. It’s also for this reason that I still try. […] I have a lot of desire, and there are two more years. But I also start knowing they could be my last. I haven’t decided.” – the legend told Gazzetta dello Sport.