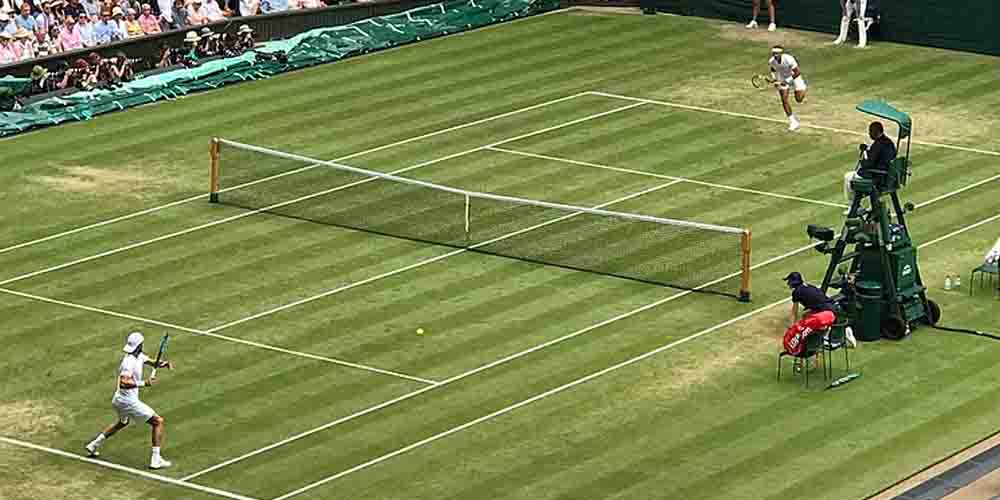 We already know the last eight players in both the men’s and women’s events with some familiar names. Roger Federer, Novak Djokovic or Ashleigh Barty have all reached the quarter-finals easily, while some other top players have already dropped out. These are the biggest shocks at 2021 Wimbledon so far.

Playing in Wimbledon in front of the crowd can certainly motivate players for outstanding performances. Like in the case of the young English talent who defeated several seeded players to reach the fourth round. While some big stars had a disappointing run due to either injuries or bad form. This year’s surface didn’t make the players’ job easy though after being extra slippery. But it didn’t affect the plays of  world ranking leaders Novak Djokovic and Ashleigh Barty. Both players seem very confident so far and are on their way to the final. Just like Roger Federer who is the oldest player to reach the quarter-final in Wimbledon’s history. But with six out of the top 10 players being already out, it has been a week full of huge surprises.

The American superstar prepared a lot for this year’s Wimbledon and was aiming for her 8th title. But unfortunately she slipped in the first set in her first round game against Aliaksandra Sasnovich. She got injured forcing her to withdraw after only 6 games. The early exit of the 24-time Grand Slam champion was one of the biggest shocks at 2021 Wimbledon. Williams broke into tears at the end of the match and we could only feel sorry for her. Her sister, Venus Williams could only advance one round further after losing against Tunisian Ons Jabeur in just two sets.

Staying with Jabeur, she continued her great run in the next rounds as well.  And she defeated Garbine Muguruza and Iga Swiatek to reach the quarter-final. She has become the first Arab woman to reach the last 16 and now the last 8 in Wimbledon. The 26-year-old player tied her best result from last year when she also reached the quarter-final in the Australian Open. Jabeur next meets second seed Belarusian Aryna Sabalenka, who is favored to win the match by online sportsbooks in the UK.

Tsitsipas and other top seeds suffers defeat in the first round

Third seed Greek player, Stefanos Tsitsipas arrived at Wimbledon in great form. He reached his first Grand Slam final in the 2021 French Open and won his first Masters 1000 title. But here the world No 4 couldn’t get through even to the second round. He was beaten by American France Tiafoe in three sets, 4-6, 4-6, 3-6 in the first round. It was a huge surprise after Tsitsipas’ latest form and previous results in Wimbledon.

Spanish Pablo Carreno Busta, Norwegian Casper Ruud and Australian Alex de Minaur also finished their tournament in the first round. And the latest surprising result is the loss of Daniil Medvedev against Polish Hubert Hurkacz. At least the Russian world No 2 could reach the fourth round where he was beaten by the 14th seed player. Still, it was another interesting result, leaving only four players from the top 10 seeds.

British fans were surely excited to see the return of two-time Wimbledon champion Andy Murray, who had a decent run in this year’s tournament. The 34-year-old got to the third round but lost there against Denis Shapovalov. The young Canadian also defeated Spanish Roberto Bautista Agut in his following game. It also meant that he reached his second Grand Slam quarter-final after the 2020 US Open. His compatriot, Felix Auger-Aliassime also got to the last 8 after knocking out the world No 6 Alexander Zverev.

In the women’s event local fans were hoping for a great performance from Johanna Konta but she had to withdraw from the tournament. In her absence fans could witness a superb performance from the only 18-year-old Emma Raducanu. Who got through to the fourth round as a wildcard. She defeated Marketa Vondrousova and Sorena Cirstea in the previous rounds but had to sadly retire from her match against Ajla Tomljanovic. Her run was still very impressive and one of the big surprises in the tournament.

In the men’s event Marton Fucsovics is the only unseeded player to get to the quarter-final. It is the first time for the Hungarian to reach this stage on a Grand Slam. In the fourth round he managed to beat Russian Andrey Rublev in five sets, who was the fifth seed of the tournament. Fucsovics is also the first Hungarian player to reach the quarter-final of a Grand Slam since 1981, when Balazs Taroczy reached the last eight in the French Open. Now the world No 48 will meet Novak Djokovic, who is the top favorite to win the men’s singles by online gambling sites in the UK.

In the women’s singles Swiss Viktorija Golubic also achieved the best result of her career so far. The 28-year-old defeated two seeded players on her route, Madison Keys and Veronika Kudermetova. Her performance is another huge surprise and can be continued against Karolina Pliskova. While Australian Ajla Tomljanovic will face an even more difficult task in her quarter-final against her compatriot, Ashleigh Barty. The world No 1 has been very convincing so far and is the favorite to win her first title in Wimbledon.