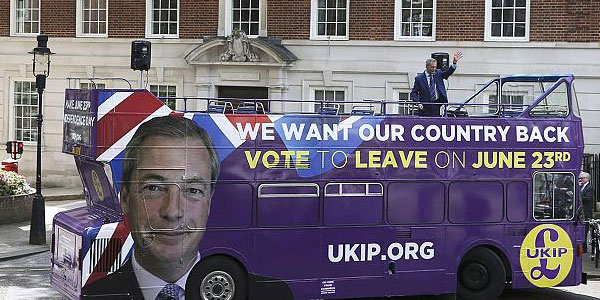 Whilst the gambling industry wanted to protect its markets from competition, like many other UK business sectors, and the media enjoyed the chaos, the cost is one far beyond mere stock prices and exchange rates as Britain must now live with an emboldened far right lead by the personification of low information populism, Nigel Farage.

Rise Of The Right

The UK Independence party leader Nigel Farage by dint of being a nasty populist buffoon with no real substance benefited most from the surprise victory for the Leave Campaign. I say surprise, over the course of Thursday evening and Friday morning Nigel managed to both admit defeat, claim a draw and then proclaim victory all within around six hours so apparently he wasn’t sure until the last possible moment, naturally the Brexit conspiracy theories don’t include him being in the know. Who’d tell him?

Certainly Michael Gove, a man who wanted to make all British schools above average when he was at the Education Ministry, and Boris Johnson, the mop topped former mayor of London, weren’t going to mention it, keeping as distant as possible from the ghastly Farage during the campaign, not the only people in the
UK gambling news coverage of his horrific little Englander attitude would sink his political future without trace, but the Media’s scathing attitude left him unpressed on the big issues.

Weirdly since the result there is almost the sense that Johnson and Gove didn’t want to win, just weaken their internal Tory party foe, David Cameron, and the Brexit conspiracy theories paint them as victims too. After all, the chalice of victory tastes a mite odd, does it not? David Cameron’s resignation has left them holding the bag, and no one is entirely sure if they understand just how complex the negotiations are going to be. It doesn’t appear so. Boris Johnson is hardly a negotiator of note.

So then the Brexit conspiracy theories have their fall guys, their dark evil lord, and a sense of horrified despair that has everyone distracted from the profiteers on the stock market, in the currency exchanges and in the wings awaiting the new protectionist laws that will increase their stranglehold on the markets of the UK. From mobile phone companies to the sites those that like to bet on sports in the UK enjoy using, there were many who stand to gain. But at what cost?

The Scots voted to remain and will now seek to leave the rest of the UK that didn’t, Nichola Sturgeon leading the charge, and Northern Ireland likewise voted to stay and there are rumblings about union with the Republic. David Cameron’s gamble has not only made millions for those with a vested interest in what the Brexit conspiracy theories contend occurred, but probably hastened the break up of the United Kingdom itself as well.

Buyers remorse in the wake of the result. The parties back away from their promises and claims, the press wring their hands and there are some in the UK gambling laws of a constitutional nature will save them from this horror, but alas what’s done is done. The Brexit conspiracy theories mesh together not just the demographics and the apathy, the misinformation and misdirection, but the rise of the extremist right in UK. The effects of Brexit will be far reaching, but not everyone will suffer them.