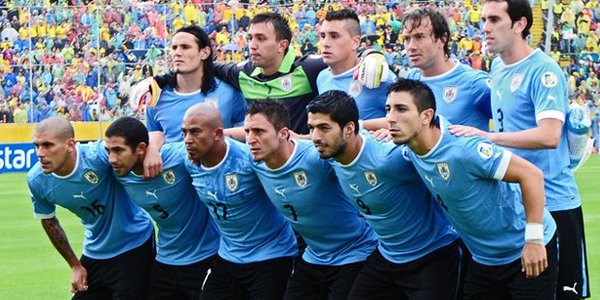 Uruguay have been drawn into the Group of Death at the World Cup, but still have a good chance to make it through.

The 2010 World Cup saw Uruguay finish in fourth spot, which is a great achievement, but of course disappointing for home fans and those who bet on sports in Uruguay on their team winning. Uruguay boast two World Cup titles, the latest one as far back as 1950, when they shocked the football world by beating the hosts Brazil.

This time around, Uruguay are rather an underdog, than a favorite, with most land-based and online sportsbooks in Uruguay giving them 29.00 odds to repeat the history in Brazil.

The road to Brazil

Interestingly enough, Uruguay were the last team to qualify for the World Cup. The finished fifth in the South American 9-team qualification group, and had to play against Jordan in the two-leg playoffs. It was the fourth consecutive World Cup playoffs, Oscar Tabarez’ men had to go through, and they won 5-0 on aggregate, leading to some hefty payouts at the bookies operating under Uruguayan gambling laws.

Betting on Uruguay at World Cup

• Majority of online sportsbooks in Uruguay are ready for betting action

The peculiarity of team Uruguay this time around is the fact that there’s not a single domestic-league player in the squad. Nonetheless, Tabarez had quite a list of talent to choose from. It looks like Diego Forlan will recover in time for the World Cup, and join the likes of Edinson Cavani and Luis Suarez, who has just won the European Golden Shoe (together with Cristiano Ronaldo).

The only line where Uruguay might have problems is defense. Diego Godin playing in Atletico Madrid, and West Brom’s Diego Lugano, have allowed 25 goals in 16 qualification matches, which is certainly terrible for any big team with hopes of World Cup glory. They will be joined by Sebastian Coates from Liverpool, despite the fact that he missed most of the season. This shows just how desperate Tabarez is to cover up the holes in defense.

The World Cup draw for Uruguay

Uruguay will be playing in the so-called Group of Death together with England, Italy, and Costa Rica. Interestingly enough, La Celeste odds for qualifying from this group are better than those of England. Uruguay are given 1.44 odds to qualify for the Last 16, and 2.75 odds to do so from first place in the group.

The team has drawn once and recorded one win over England in their previous World Cup meetings. As for Costa Rica, Uruguay have beaten them 2-1 on aggregate back when they were qualifying for the 2010 World Cup in playoffs. Italy have only managed to beat them on penalties for the third spot in last year’s Confederations Cup. All things considered, punters might want to look at the 2.50 odds, sportsbooks are offering for Uruguay failing to qualify from their group at the World Cup.

In case they do go through, they can meet any team from the list of Japan, Greece, Colombia, and Ivory Coast. The odds on them losing out in the Last 16 equal to 3.75, not a bad bet. Should they make it a round further to the quarters the odds on Uruguay losing to either Netherlands or hosts Brazil are 3.25 seem like a very rewarding offer.

In case Uruguay makes it to the semis, but once again fails to win third place, the bookies will pay at 11.00. However, a more rewarding proposition awaits those punters who wish to wager on them reaching the final, but losing out there: 17.00 odds.

Luis Suarez has certainly enjoyed a successful season in the Premier League, a bit tarnished by the fact that Liverpool failed to win the crown in the end. He was the top goalscorer in England (and in Europe), so there’s no surprise that the bookies favor him to find the back of the net more often than anyone else for his team. The odds on Suarez becoming the top Uruguayan goalscorer are 1.83.

However, Cavani has outscored Suarez during their last eight international matches, and his odds of 3.50 look like a very good bet. 2010 World Cup joint-top scorer Forlan is also in the running at 15.00 odds.