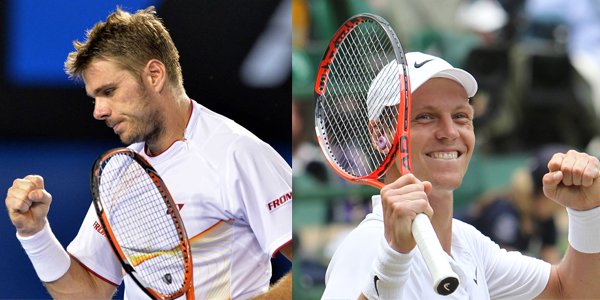 Stanislas Wawrinka takes on Tomas Berdych in Day 2 of the ATP World Tour Finals in London.

It’s Day 2 at the ATP World Tour Finals in London, where the top 8 tennis pros have come together to contest the season-end event. Marin Cilic has replaced Rafael Nadal, who opted to withdraw from the tournament to have an operation.

As usual the event at the O2 delivers a lot of wagering opportunities for those who bet on sports in the UK. Besides the Round Robin, where the 8 players are split into two groups, betting odds will also be offered on the semi-finals and of course the all-deciding final on Sunday.

This year, Roger Federer will try and win his record 7th title, while the current world number 1, Novak Djokovic, will try to make it 3 in a row and 4 overall. There’s a side battle this time around, perhaps even bigger that the one for the main crown.

Federer can still end the year on top of the rankings provided he becomes the undefeated champion and Djokovic wins no more than two games. Naturally, this is a highly unlikely event at this point, and most online sportsbooks in the United Kingdom are backing Djokovic to defend his title.

The home crowd favorite, Andy Murray, was off to an awful start yesterday, upsetting his fans and those who bet under British gambling laws. The Scotsman went on to lose to Kei Nishikori in straight sets. Andy’s loss was even more painful considering the Japanese pro went on to make 8 double faults with an overall serve rate of 46%.

Roger Federer needed a tie break in the second set against Milos Raonic, but managed to win it 7-0, making the overall score 6-1, 7-6 in his favor. Federer is of course the favorite to win Group B and meet Djokovic in the final on Sunday.

Group A is in action today, with Stanislas Wawrinka facing Tomas Berdych in a match, which could decide who gets to qualify for the knockouts. The two players have already met in the opener of this event last year, producing a very close affair, where Berdych took the 2nd set tie break 7-0, and went on to lose the deciding set.

This is the fifth O2 appearance for Berdych in a row, but the Czech player has only made it once out of Round Robin so far, back in 2011, when he subsequently lost to Jo-Wilfred Tsonga in the semis. Wawrinka made it to the semis in his debut last year, and there’s a good chance he will repeat his success this year too.

However, the Swiss pro is on struggling form right now, including a disappointing loss to Kevin Anderson just a week ago in Bercy. Wawrinka will be playing Berdych for 15th time, and could provide punters with great value considering he’s the underdog at the majority of bookies.

Bet365 offers a line of 2.10 on Wawrinka’s success against Berdych, while the Czech gets shorter odds of 1.72. Considering Stanislas have won his last four meetings with Tomas, and seven out of their last eight matches, backing him will probably be a smart bet.

On the other hand, Wawrinka has a dismal record of 2-4 since the US Open, including defeats to Tatsuma Ito and Mikhail Kukushkin. The Swiss also hasn’t gone through past last eight anywhere since Queen’s Club pretty early this year, making his understandably long.

As for Berdych, he hasn’t been on top form either, including his last performance in Bercy, struggling to reveal the form we all know the Czech player is capable of. He squeezed past Adrian Mannarino and Feli Lopez, overcame a break disadvantage in the final set against Anderson, but went on to lose to Milos Raonic.

With a losing 4-5 record against top-10 players this year, Tomas Berdych isn’t exactly the favorite to win in London. Moreover, comparing his record to that of Stanislas Wawrinka, it’s difficult to see why only the recent form is taken into account when drawing up odds for tonight’s match.

The pair got almost equal odds to win first set: Wawrinka is given 1.90 odds from Bet365, while Berdych enjoys a slight advantage at 1.80. As for the correct score odds for the first set, tie break is the most anticipated result with 7-6 to Wawrinka paying at 6.00 and 7-6 to Berdych delivering a 5.50 payout. 6-4 result in 1st set pays at 6.50 for Stanislas and at 6.00 for Tomas.

Interesting value can be found in the double result market. Bet365 pays at 2.50 for Wawrinka to win 1st set and match, the same result for Berdych delivers 2.10 odds. In case Stanislas goes on to win 1st set, but then loses the match, the payout is 6.50, while the same event for Tomas pays at 7.50 odds.