64 percent of Canadian population is favoring single-event sports betting, according to the latest polls. 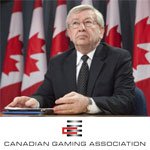 Canadian MP Joe Comartin is looking gain support for his Bill C-290, which would change Canadian gambling laws and legalize single-event sports betting in the country. The latest polls carried out by Ipsos Reid research company reveal that 64 percent of adult Canadians are in favor of the bill.

The bill’s initial introduction dates back to September 2011, it was then passed unanimously in the House of Commons in March 2012, and is now awaiting the Canadian Senate resolution.

The president of the Canadian Gaming Association, Bill Rutsey, told Canadian gambling news: “Right now, over Cdn$10 billion or more is being wagered through illegal sports betting every year in Canada, and a further Cdn$4 billion is wagered online through illegal offshore betting websites.”

Naturally, the legalized and regulated sports betting in Canada should bring the much needed revenue for the state coffers, should the bill pass the Senate. Bill Rutsey continued: “We need to bring more regulation and enforcement to this otherwise overlooked problem, and that begins with the passage of Bill C-290.”

Rutsey observed that besides the support of Canadian population, the bill also enjoys support of 8 out of 10 provincial governments, who all say that the current regulations are outdated.

Sports betting on two or more events – parlay betting – has been around in Canada for over two decades. But recently, the Federal Minister of Justice has been addressed with propositions to change the criminal code in order to allow the single-event betting as well.

The governments of Saskatchewan, Alberta, British Columbia, Manitoba and Ontario were the ones, who wrote to the Minister. Quebec, New Brunswick and PEI provinces have also voiced support for the legislation change.

In the recent debate on the Bill C-290, it was recommended for passage by various expert witnesses representing the legal, law enforcement, academic, regulatory and problem gambling research and treatment communities.