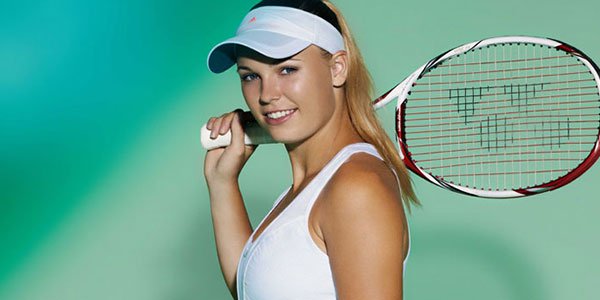 At New Haven, Connecticut Caroline Wozniacki took a top level exam in preparation for the U.S. Open. Fortunately she passed with flying colors. Making gambling news, the Danish player persevered through two tie breaks and was down three match points. Her words clearly demonstrated her fatigue. “I think result-wise, yes, probably [was the toughest result in Connecticut], but at the end of the day, hats off to her for not making me feel great out there. She (Vinci) completely ruined my rhythm.”

• Wozniacki is the only Scandinavian female player to enter the top 10
• Her longest rival in her career is Venus Williams
• She recently won a two tie-break, three set match at the Conn Open

Her opponent Roberta Vinci was gave a plethora of various shots and seemed ready to win the match. The cheering of the crowd would make one think tennis was America’s national sport. The world number four will now enter the quarterfinals. Once the WTA ranked world number one, the Dane held her position for 67 weeks. Although she has won 23 WTA titles, Wozniacki has yet to win a Grand Slam.

Caroline Wozniacki was born in Odense, Denmark in 1990. Her parents, both athletes, emigrated from Poland. Wozniacki’s mother was on the Polish Women’s National Volleyball Team while her father was a professional football player. Caroline’s brother currently plays professional football for IF Skjold Birkerød in Denmark. The Danish tennis star is defined by her defensive play.

In junior tennis, Wozniacki was successful having won the Orange Bowl tennis championship. Although she entered two WTA tour competitions at the Western and Southern Financial Group Women’s Open and the Nordea Nordic Light Open, Caroline was unsuccessful. As she continued to play at the junior level, she reached the final of the Junior Australian Open.

In the same year, the Dane reached the quarterfinals at the Memphis Hardcourt Championships. At the Liverpool International Tennis Tournament, a Wimbledon preparation tournament, she won over Ashley Harkleroad. Losing in the first round at Wimbledon, she was later able to secure the girl’s single tournament title. On her return to the Nordic Light Challenge, the Dane reached the quarterfinals.

Winning the USD 25,000 ITF tournament in Istanbul, Turkey, Wozniacki claimed her first senior player title. After winning two USD 75,000 ITF tournaments, she progressed to the semi-finals of the AIG Open in Tokyo losing to her perennial rival Venus Williams. Having bested Venus 9-2, it would be risky for anyone mobile betting to wager against the Dane.

In 2008 at the Australian Open, Caroline Wozniacki progressed to the round of 16, but lost to world number two Ana Ivanovic. At Wimbledon the Scandinavian reached the quarterfinal and lost to Jelena Jankovic. Caroline was finally able to attain her first WTA title at the Nordic Light Open. Soon she won a second WTA tournament at the Pilot Ten Tennis tournament in New Haven.

Although she made it to the fourth round of the U.S. Open, she beat Victoria Azarenka in the process. She went on to win yet another WTA title at the AIG Japan Open Championships. In 2009, Wozniacki picked up the pace in her career as she entered the third round at the Australian Open. Next, she progressed to the quarterfinals at Indian Wells and the Miami Masters. At the celebrated French Open, the Dane progressed to the third round.

The pinnacle of her year was reaching the U.S. Open final becoming the first Danish woman to accomplish this. The next year Wozniacki progressed to the fourth round of the Australian Open, but lost to Li Na. The match earned the young Dane a number three ranking. Losing in the quarterfinals of the French Open and the fourth round at Wimbledon, Wozniacki remained relentless in her pursuit to win. After her semi-final performance at the U.S. Open, she was one of two women to have reached at least the fourth round on all four Grand Slam events that year.

Wozniacki became the fifth player in history to secure the world number one ranking without winning a Grand Slam after her victory over Azarenka at the China Open. In 2011 the new world number one made it to semi-finals of the Australian Open and the U.S. Open. Despite her fourth round achievement at Wimbledon, she secured six finals appearances that year. She has become a safe choice for quarterfinal appearances for those who bet online sportsbooks in the U.S..

After an Australian Open quarterfinal appearance in 2012, Wozniacki started to move down in the rankings. Despite her 20 titles, the Dane only achieved two that year and fell out of the top 10. The next year proved to be a challenge as the Dane struggled with her form. In 2014, she turned her game around and started to come back into form. She reached her second Grand Slam final at the U.S Open. In addition she progressed to the fourth round at Wimbledon and the third round of the Australian Open and French Open. Her greatest success so far in 2015 was her fourth round appearance at Wimbledon.