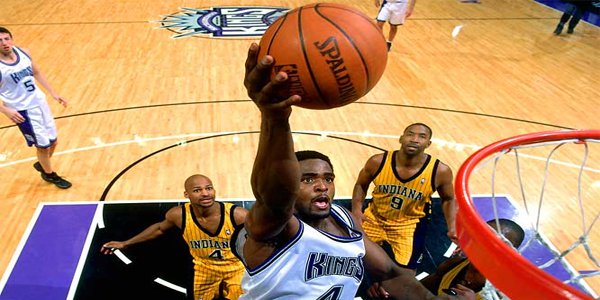 Chris Webber has always been celebrated for his basketball ability all of his life. Since the age of 12, Chris has been eyed by the college world. At University of Michigan, he made U.S. gambling news as the last remaining piece of a plan to bring five college freshman together on the court. Leading a group of the most popular freshmen in the history of college basketball,

• At the end of his career, Webber had a fortune of USD 143 million.
• Webber was the 1st sophomore since Magic Johnson to get no. draft pick
• Webber also owned a restaurant called Centre Court with C-Webb for some time

Webber was able to reach the NCAA Final twice and loss once to Duke University and the other to University of North Carolina. After the second loss, and humiliation from a mistaken time-out call, Webber decided to go into the NBA. There he became an instant star making NBA Rookie of the Year. Six teams later and various endorsements, Webber amassed a fortune of USD 143 million.

Chris Webber played for Detroit County Day School where he led the school to three High school state championships averaging 29.4 points and 13 rebounds a game. The former high school player of the year and MVP of the McDonald’s All-Star games, Webber enrolled at the University of Michigan. Webber was part of highly celebrated group of freshman called the “Fab Five” which also included Juwan Howard, Jalen Rose, Jimmy King and Ray Jackson.

During this time, everybody in the country was drawn to their “hip hop” style and unorthodox ways on the court. Also used to market many products, the Fab Five felt the popularity of pros but with the earnings of students. That led some of them to accept the financial offerings of Ed Martin, a private booster who helped give many college and high school students money in return for future favors.

The scandal wasn’t exposed until later in his career. As the first sophomore to get number one pick since Magic Johnson in the 1993 draft, he was accepted by the Orlando Magic and traded to the Golden State Warrior for Anfernee Hardaway and three future first round draft picks. At Golden State Webber averaged 17.5 points and 9.1 rebounds a game. Any wager, within U.S gambling laws, for Webber winning the NBA Rookie of the Year Award would have been money in the bank.

Webber’s bullet years and his entrance into Sacramento

It was there was Webber’s finest basketball was played. In his first year, Chris Webber won the rebounding title dethroning Dennis Rodman who held the title for seven years. Webber helped Sacramento become one of the top franchises in the league. In 2001, Webber re-signed a new contract for USD 116 million. Making the All-star team again 2000 and 2001, Webber was showing his validation as one of top power forwards in the NBA by having a career average of 27.1 points and 11.1 rebounds.

Webber led the Kings to the Western Conference Finals against the LA Lakers in 2002. Being one of the more memorable playoff series’ in history, the Lakers won amidst extreme controversy in terms of the officiating. Former NBA referee Tim Donaghy, incarcerated for betting on games he refereed, filed court papers stating the Game six of the series was fixed by NBA officials.

Webber remained a force the following year, but in 2003 things took a different turn. During the Western Conference Semi-Finals, Webber had a knee injury that made him miss almost a year of playing. After his microfracture surgery, Webber never was the same again and was traded months later. Regardless of his loss of speed, agility and athleticism, Webber was still able to earn USD 17 million with the Philadelphia 76ers.

In 2006, Webber was still putting up 20 points and 10 rebounds a game. In 2007 Webber, having issues with the Philadelphia organization, had his USD 25 million left on his contract bought out by the 76ers making him a free agent. No punter using online sportsbook in the U.S could predict that Webber would be paid by Philadelphia for not playing.

After a year with the Detroit Pistons, he played nine games for the Golden State Warriors for USD 602,000. After retirement, Webber was part of an investment group representing basketball and football players, real estate and film projects. Webber also owned a restaurant for some time and got involved in music production. Currently, Webber is an analyst on NBA Gametime Live on NBA TV and works as an occasional analyst on Inside the NBA on TNT.