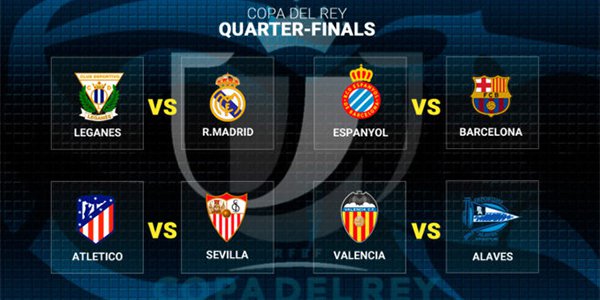 Let us have a look at the next Wednesday Copa del Rey quarter-finals preview, as the draw has been revealed, and the fixtures for the first leg are ready to go on Jan 17.

The lower-tier teams have lost their shot on Copa del Rey in last-16, and the quarter-finals will feature top La Liga 5 teams adding to Leganes, Espanyol and Alaves. The Spanish giants, Real Madrid and Barcelona avoided an early clash and got an easy draw. Thus according to online sportsbooks in Spain the toughest clash in the quarter-finals will be between two top-flight titans Atleti vs Sevilla.

In our Copa del Rey quarter-finals preview we expect no surprises, but if the top four La Liga teams prevail, they will face hard challenges in semifinals. Let us check the odds offered at Bwin Sportsbook.

FC Barcelona are preparing to visit RCDE Stadium on Wednesday for the Catalan derby. According to online sportsbook news, it will be the 19th time that Espanyol and Barca have been drawn against each other in the Cup, and so far the balance is clearly with the Blaugrana who have progressed on 13 occasions.

After an impressive victory against Celta Vigo 5-0 at Camp Nou, no doubt that a best bet is on the Copa del Rey title-holders to crush their opponents. Their previous victory with Luis Enrique at RCDE Stadium in 2015/16 season was 2-0, and their La Liga victory in early of this season was 5-0 with a hat-trick to Lionel Messi. So the score might come out big this time as well. The odds for a win to Barca stand at 1.36, while the odds for unlikely win to Espanyol are 7.00.

Real Madrid are hoping to win their 20th cup this year, especially when their hopes for La Liga title run are fading away, but their last game against Numancia finished with a draw 2-2 at the Bernabeu, to be qualified for the quarter-finals 5-2 on aggregate. Their outing in the first leg will be against Leganes. Probably Zidane’s men will give their best to secure the semifinal, but the goal is yet to be tested against the only team that they did not face in La Liga this season.

With the current crisis in Real Madrid you should think twice who will win or if a draw can be also possible. The odds for a victory to Los Blancos are 1.45, for a draw 4.75, while a win for the hosts the odds are 6.00.

High-flying Valencia have been pleased to draw Alaves, the lowest-placed team remaining in the Copa del Rey. Although Alaves will be in high spirits after beating Segunda B side Formentera 5-1 on aggregate in round 16, 3rd placed Valencia in La Liga will fancy their chances of advancing past Alaves. At Bwin Sportsbook the odds are 1.33 for Valencia to win, 5.25 for a draw, and 7.75 for Alaves to surprisingly win the match.

The toughest challenge is expected to be between the second-placed Atletico Madrid and Sevilla the fifth. The first leg on Wednesday will take place at Wanda Metropolitana, and despite that the visitors have dropped off late this season, we expect a hard clash between the rivals. Since Atleti have recovered from a poor start to climb second behind Barca, we expect them to win with odds standing at 1.55, for a draw the odds are 4.00, while a win for Sevilla the odds are 5.75.