Crazy Competitions To Bet On – Not For The Faint-Hearted

News >Crazy Competitions To Bet On – Not For The Faint-Hearted 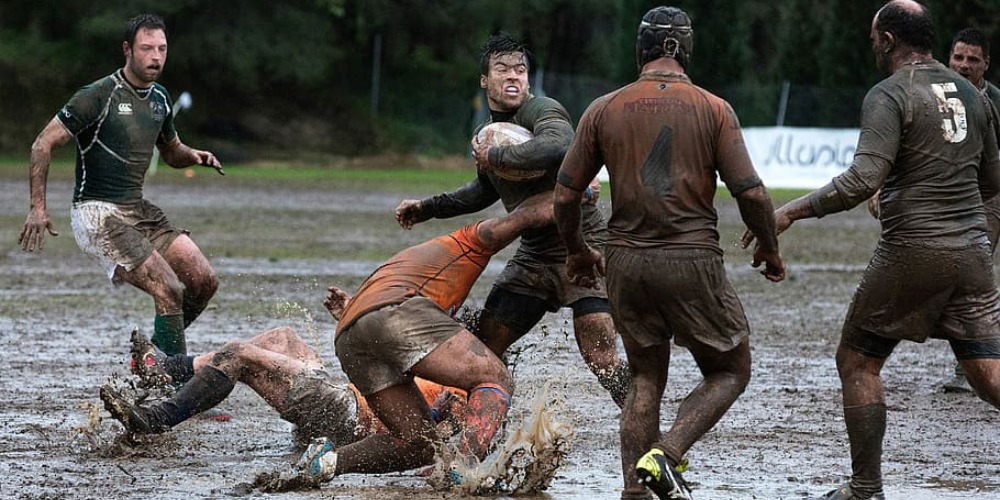 The human mind never ceases to amaze us. Especially when it comes to creating sports out of silly but fun activities. Our article about crazy competitions to bet on will show you some of those. Think of a pastime that you only dare to do in the safety of your home, surrounded by people who won’t think you stupid for it. Well, some people turned their crazy ideas into actual sports. Check them out below!

Who does not like to be dirty? It’s a legitimate question, but playing in the mud is maybe not something you consider a fun pastime. However, the same doesn’t go to the hundreds of participants who play football, handball, sled race, and volleyball, among others, in the mud. The competition is in Brunsbüttel, Germany, every year for over a decade now. The funny games have a special purpose: they do this to raise awareness and help people with cancer, so this is a charity event. They have several slogans, like dirty sports for a clean cause, or we are stronger than cancer.

More than forty teams from various parts of Germany and the neighboring countries compete in a literal sea of mud! Even celebrities joined the charity and went into the river Elbe. They have raised more than € 300,000 so far and hope to support the noble cause for many years to come. They call the competition Wattoluempiade and the athletes wattlets. If you want to have fun and help, at the same time, visit the annual event. The media covers the whole event, so if you prefer to check it out from a safe distance, go to online sportsbook sites in Germany!

When you hear the word regatta, you probably picture athletes in fancy clothes, rowing gracefully. Though, what if we add the word pumpkin to the mix? Well, then we get one of the craziest competitions to bet on! The competitors will row, not so gratefully, in a giant, carved pumpkin instead of a boat.

When we say giant, we mean that, at least, one person can comfortably stand in it, and the pumpkins’ sides go up until their chests. Anyone who knows how to swim and is over 14 can enter the funny tournament. This race is, basically, about participants crossing Lake Pezaquid in the pumpkins. However, these enormous pumpkins are not as obedient as a boat. Plus, if they carve too little out of their insides, they will be too heavy, and if they carve out too much, they can crack and sink.

The track is half a mile (800 m) from start to finish. Danny Dill and his son, Howard Dill, pumpkin merchants, founded the competition in 1999. Leo Swinamer dominated the races, winning six out of the ten, including one at 73. The tournament’s popularity continues to grow! The 2008 tournament already had around 10,000 spectators and 60 entrants. This is not the only pumpkin regatta race you can find, several similar competitions across the world. The organizers usually provide the vegetable boats, so don’t hesitate! Look up the closest event near you and try this unbelievable race or find special bets concerning the pumpkin regatta!

Finnland’s new sports trend is the hobbyhorse championship. The country is the proud owner of many crazy competitions to bet on. Check them out in our article about the most bizarre sports ever! Back to our extreme horse race! Thousands of fans cheer and bet on these events, where the competitors have to get through the obstacles using their handmade horse sticks. Yes, they are not real horses.

The obstacles could be over a meter high, and that is what the participants have to jump over as if they sat on actual horses. Regardless of gender and age, anyone can enter the competition. They take the tournament so seriously that they name the horses and even register them. So betting the Derby feels real. Though, the aim is to have fun, of course.

It’s a traditional sport in the Netherlands and Belgium and comes from Friesland. Our childhood is coming true in this sport. Which boy or little girl would have missed out on such an opportunity? In translation, it means canal jumping. Competitors have to take a running start and jump over a usually 20-meter long canal or lake with the help of an 8-13 meter long stick. They have to grab the rod, already placed in the water, without bouncing off or sliding down. Then the competitor tries to climb as high as possible on it.

It then starts to bend down and practically crashes into the sandy shore on the other side. You probably understand that this crazy competition is not without risks. If things go according to plan, the canal jumpers will land on a sandy area or in the water if not. If you want to be a jumper and not just a bettor, take lessons from trainers because it is only fun if you do not break bones. On August 24, 1767, they held the first official canal jumping championship in Baard, Friesland. The competitions have been around since 1956. Look them up at 22Bet!

You can speed down a hill with your sled, even without snow. Don’t miss out on summer sled races in Madeira! It is a beautiful island with many exotic opportunities. One of them is sled racing in the heat! Check it out at 22Betif you do not believe us! You have surely seen the sledding options in Dubai, where you can slide down giant dunes in the desert. Well, this is something like that. Except that, you race down a mountain on a wooden toboggan sled on a concrete road. Two men, dressed in white, direct the sled from behind. The speed is around 45 km/h, and there is no brake. They use their feet if they want to stop. Like Fred and Barney. The destination is Funchal, where the competitors can relax and watch the Atlantic Ocean. This tradition dates back to the 1850s when they used it as a means of transportation.

They held the first race in 1965, where only the members of the Navy and Army participated. Since then, however, anyone can enter the tournament. There are six people in a team, five are pulling and pushing the bed, and one is hanging onto it. The beds have four wheels, but the runners also need to know how to swim. In the 3 km race, they have to cross a river, and hills are also included in the route. So the competition is quite hard, we consider it crazy because of the circumstances. The race is fun for the spectators but no joke for the participants. Each team must provide the beds, which they can decorate.

This sport is a significant national game for the Scots, and they usually perform it at traditional events. The log has to spin in the air to touch the ground with its other end. A caber throw is a Scottish athletic event where competitors throw a large column called a caber. You have to be very strong for sure. Given a large, heavy, wooden log. The competitors have to lift it and hold it with their palms, and then, after taking a few steps with it, throw it. You can usually see this at the Scottish Highlands Games.

The log is usually 5.94 m, 19 feet and 6 inches, high, and weighs 12.5 stones, 175 pounds or 79 kg. The primary goal is to throw the beam so that it turns in the air and the other end hits the ground. Ideally, it should fall directly in the ’12 o’clock’ position. The distance they threw it does not matter. The most effective throw is the highest. If the caber lands at the right end but falls back towards the thrower, he will earn fewer points. The throws get points based on the numbers on the clock, and 12:00 is the highest.

It’s hard to imagine a sport with more violence and team spirit than Bo-taoshi. Maybe Kabaddi comes close, which is also a crazy competition to bet on at 22Bet Sportsbook! The game is similar to the capture the flag. In this Japanese competition, two teams line up against each other. They both have a high pole with a player climbing on top of it per team. The teams then split into two, forming a defensive and an offensive unit. The offense tries to pull the other team’s player off the pole while the defenders keep them away from their own bars.

The winner is the one who not only removes the man from the opponent’s pole but also knocks the column down to an angle of at least thirty degrees from the ground. In the game, each team has 150 members, 75 attackers, and 75 defenders. The point is that members of one team get together and set up a long bar that they need to protect from the other team. The offense has three minutes to tilt the defense’s pole at least 30 degrees and keep it that way for at least three seconds.

Japanese invented Bo taoshi in the 1950s, which is a common sport in high schools there. It is no accident that the players wear a helmet during the fight, as punches and kicks are completely acceptable and, basically, unavoidable during a competition like this. Though, we have to admit that it’s a sight to behold when the 75 defenders protect their pole with their bodies, when the 75 attackers, literally, throw themselves onto them in front of the opponent’s pole.