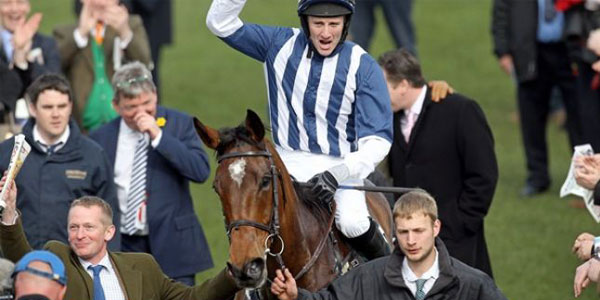 The death of Irish jockey JT McNamara has today brought much sadness to the horse racing community.

The death of Irish jockey JT McNamara was announced today, stemming from injuries suffered in 2013 while racing. Paralysed after a fall at Cheltenham, in which he broke several verterbrae. He moved to Limerick in 2014 after being discharged from Southport’s North West Regional Spinal Injuries Centre, confined to a wheelchair. He suffered further complications this month, requiring treatment at Limerick’s University hospital; in the days before his death he had be released to spend time with his family. He was 41.

JT McNamara had a very successful amateur racing career, winning over 600 races. He had reportedly told friends that he was planning to retire in the summer of 2013, only months after his fall. He won four times at Cheltenham, including victories in the 2002 and 2012 National Hunt chases. The former victory was broadly hailed as a sensational victory, showcasing his talents as a rider. He also won the 2005 Cross-Country Chase and the 2007 Fox Hunter Chase.

JT McNamara was much loved in horse racing community

AP McCoy, one of the greatest jockeys ever, lead tributes today: “I know he would like us to remember to good days. I’d like him to be remembered as a fantastic person, fantastic jockey and a fantastic human being.”.

McNamara often rode for trainer JP McManus. McManus’s training manager also made a tribute: “It’s so sad and all our thoughts go out to Caroline and the rest of the family. A nicer fellow you couldn’t wish to meet. He was in great form up until maybe a week ago and he’s definitely been a fighter. He fought a great fight.”
He continued, “ “The boss and him and myself had so many great days together. He was a great rider, but he also did a lot of pre-training of a lot of our younger horses and was a great man to tell you whether they were good or no good.””
When Bruce Springsteen sang in Limerick shortly after the accident, he dedicated a version of his classic hit “My Hometown” to the jockey.

There was a minute’s silence held at the Galway Festival on Tuesday. The festival continues, with online sportsbooks offering competitive betting markets on the many races over the course of the week. Visit online sportsbooks in Ireland to find a great selection of odds on the festival.