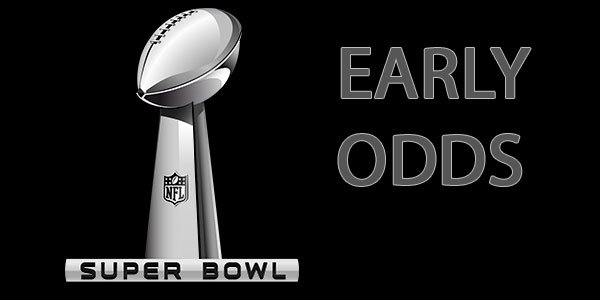 Check out the early Super Bowl 50 odds with this online betting piece assembled by GamingZion!

The 2015 NFL regular season was concluded on Sunday. So, we know all the remaining twelve teams as well as the schedule of the Wild Card games in the first round of the 2015 NFL postseason. Have a look at the six playoff teams’ early Super Bowl 50 odds in both conferences with the courtesy of Intertops Sportsbook, a legal internet betting site accepting US players!

One of the biggest upsets in week 17 was the defending champions, the New England Patriots loosing against division rivals Miami Dolphins. Tom Brady was beaten up hard and this setback meant that the Pats possibly gave up the No. 1 seed and the automatic home field advantage to the Denver Broncos. Still, the Massachusetts club is favorite to win the World Championship according to early Super Bowl 50 odds. Their outright win is priced at 5.00 (4/1) by Intertops Sportsbook.

All the Colorado franchise had to do was to defeat the San Diego Chargers to claim the home field advantage. Second-string quarterback Brock Osweiler started instead of the returning Peyton Manning. However, the youngster failed to show the confidence he demonstrated in recent weeks.

So, in the third quarter, Manning had to take over behind the center in order to win the game. The 39-year-old showed excellent game managing skills and the Broncos were able to claim the victory due to their running game. Though Manning is healthy, the top-seeded outfit in the AFC is only the fifth favorite amongst early Super Bowl 50 odds with online betting odds of 7.00 (6/1).

The Denver Broncos winning meant that No. 5 went to division rivals Kansas City, who will kick off the Wild Card weekend at the Houston Texans on 4.35 pm ET Saturday. The Texans only had the task to beat the Jacksonville Jaguars, which they duly carried out, to claim the No. 4 spot in the AFC. The Chiefs are seventh favorites for an outright win with online betting odds of 15.00 (14/1) according to Intertops Sportsbook. The Texans are the true outsiders in the AFC with 51.00 (50/1) early Super Bowl 50 odds.

Arguably the biggest upset in week 17 was the Buffalo Bills beating the New York Jets. The Jets would have secured a playoff spot with a victory. However, their loss handed the opportunity to the Pittsburgh Steelers, who won at Cleveland comfortably. The Steelers are sixth favorites to win Super Bowl 50 with odds of 13.00 (12/1). They will play the second game on Saturday against division rivals Cincinnati Bengals at 8.15 pm. ET. The Bengals, No. 3 in the AFC, have 15.00 (14/1) early Super Bowl 50 odds.

The Carolina Panthers thrashed the Tampa Bay Buccaneers to claim the No. 1 spot and the home field advantage in the NFC. Arguably the strongest team in the league according to many of those who bet on sports in the US, the Panthers are joint favorites together with the Patriots according to odds provided by Intertops Sportsbook. They are 5.00 (4/1) to win the first Super Bowl in franchise history.

Arguably the most complete team in the nation, the Arizona Cardinals suffered a heavy, 30-point defeat against the Seattle Seahawks.

Palmer and the team have to work harder (Photo: FOX sports)

Still, Carson Palmer and co. will have two weeks to sort things out for their third possible encounter against the Seahawks this season, since they retained the No. 2 spot in the NFC. Bruce Arians’ men are still third favorites to win the championship with 5.50 (9/2) early Super Bowl 50 odds.

The Minnesota Vikings and the Green Bay Packers battled for the NFC North title in the very last game of the 2015 NFL regular season. It was close but a Xavier Rhodes interception in the Red Zone sealed the game for the Vikings. Thus the Minneapolis club – 21.00 (20/1) to win Super Bowl 50 – won themselves the division title as well as the harder task in the Wild Card weekend.

For more NFL and early Super Bowl 50 odds, register at Intertops Sportsbook, a legal US sports betting site! Also read the Intertops Sportsbook  review in our online betting guide to learn more about one of the best online sportsbooks in the EU and the US!