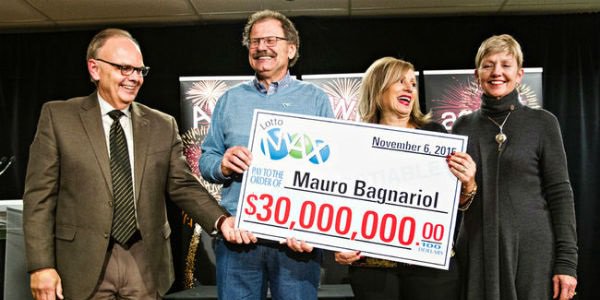 In Canada gambling news, Edmonton’s newest multimillionaire returned to the 7-Eleven where he’d initially purchased his lottery ticket on December 3, weeks after the November 6 draw, and discovered that he was a Lotto Max jackpot winner. Says Bagnariol of the surreal experience: “I saw all the numbers on the screen, but I had to check a bunch of times to believe it. I couldn’t believe it. I was completely mesmerized and so excited.”

Bagnariol says that he plans to give money to his children so that they can pay off their mortgages, and will invest the rest. He emphasizes that “that’s the most important thing for me, being able to help my family,” but admits that if he’d won 30 years earlier “I’d go out and buy a Ferrari.”

Lotto Max jackpot not the only tantalizing lottery jackpot around

Just because online gambling sites in Canada headlines have been filling up to the brim with news of Canadian Lotto Max jackpot winners, doesn’t mean that non-Canadians can’t hit the big time, too. While most countries have land-based lotteries on offer, there are also numerous internet-based lotteries that players can partake in as well.

EuroLotto is a great online choice for Europeans looking to snag a winning lottery ticket. While many lottery players are like Bagnariol and like to play with actual tickets, they shouldn’t shy away from internet versions, as EuroLotto carries a number of well-known providers, including EuroMillions, EuroJackpot, MegaMillions, Powerball, SuperEnalotto, and Lotto 6/49. And don’t think you’re missing out on multimillions when you’re playing via the web; in opposition, prizes on EuroLotto regularly reach up to a quarter of a billion.

If you’d like to learn more about online lotteries, you can read all about it on our EuroLotto review page.