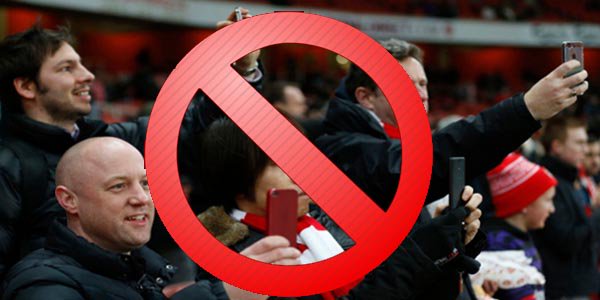 In perhaps not the best start to a new season’s public relations the EPL, English Premier League, has had to issue an apology for being a “killjoy” after warning fans not to upload videos of goals from matches they attend as it breaches copyright laws, and said it was developing software to seek out these clips on social media sites so they can be removed, actually working with twitter to make this happen.

EPL Having To Be Internet Policeman Too?
• Fans share goals captured on phones instantly
• Vines and GIFs of highlights commonplace
• Fans film on mobile betting they’ll get away with it

“You can understand,” said Dan Johnson, director of communications at the EPL, “that fans see something, they can capture it, they can share it, but ultimately it is against the law. It is a breach of copyright and we would discourage fans from doing it, we’re developing technologies like gif crawlers, Vine crawlers, [and are] working with Twitter to look to curtail this kind of activity.”

The Battle To Preserve Profits And Intellectual Property

With Rupert Murdoch owning the rights online gambling sites in the UK can’t even show clips of matches, let alone the whole game, and there is some concern that online match coverage is simply left aside as Rupert Murdoch also owns BSkyB the television company currently in open conflict with BT over who gets to show which matches to fans in the UK, a battle that last year saw BT spending over a billion pounds on showing the UEFA Europa League and 38 EPL games.

It probably won’t make the gambling news headlines that Murdoch’s newspaper “The Sun” has backed the EPL’s stance saying “It’s important to underline that it’s illegal to do this.” which maybe true but as technology constantly provides ever more ways to gain and share graphics and video there’s probably not going to be an end to the current trend, despite some grounds banning tablets and laptops from their games.