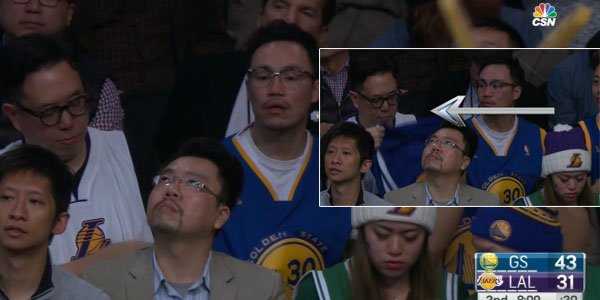 Los Angeles Lakers was down against Golden State Warriors when a faithful Lakers fan decided his team can’t win this game, so…

Online gambling sites in US report that Golden State Warriors have made a trip to Los Angeles to play against Los Angeles Lakers. The defending champions were clear favourites for the upcoming match as their previous encounter has been rather easy as well: the Warriors have trashed LA Lakers by 34 points.

At this time, the Golden State Warriors also started much better than their opponent. In addition, they basically win the game by the end of the third quarter. After 75% of the game being played, Lakers were down by 32 points. That is the point where a faithful Lakers fan starts thinking his team might have just lost this game, and start hoping for better results in the future.

There is another type of faithful Lakers fans

However, not all faithful Lakers fans are the same. Some might hope in better results, but some make sure that their teams will win the game! Despite the fact that they do nothing to help their team getting better, they will reach their purpose in watching sports and their teams are going to win. Always! They worked out the perfect strategy!

This particular spectator decided to switch his Lakers jersey to a Warriors jersey when the match seemed too easy for the visitor team. We can’t blame him. He just did what he needed to do in order to feel better. His team won, he must be really happy about the result now. Too bad that those who regularly bet on sports cannot change their bets in the last seconds. Everyone could not only be much happier, but much richer too!