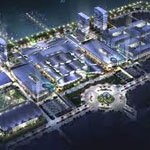 Presidential spokesperson Edwin Lacierda defended Entertainment City by claiming it is a family destination, not a sin city. Lacierda insisted: “The idea of the Entertainment City, to be more specific, is that it’s beyond gaming.”

He added: “We’re trying to develop a situation where we can pattern Las Vegas. We can have the entire family brought in and enjoy the amenities of a family vacation. There should be no morality issue as to the existence of these gaming areas.”

Lacierda emphasized: “Entertainment City is being developed so that everyone, be it adults or kids, can enjoy staying there.”

“Entertainment City involves the whole family going on a vacation while the adults are playing in the casinos. The children could go around and be entertained as well with the various theme parks or whatever rides that they are proposing.”

The Philippines expects a lot from the new Filipino casino. The 100-hectare Entertainment City is supposed to bring in $10 billion in annual gaming revenues after all four luxury casinos are operational.

The Pagcor corporation is fully under government control and ownership according to the Filipino gambling laws. The company pays at least 50 percent tax on its gross gambling revenues to the government, so the more money Entertainment City makes, the more money flows into the state coffers.