From Round-Shaped Cards to the Bicycle Deck: The History of Playing Cards

Can you imagine modern table games without the standard card deck? It seems that the traditional French deck has been around for a long time. However, the cards we all know today underwent a long process of evolution. Today, we are going to take a look at the history of playing cards. 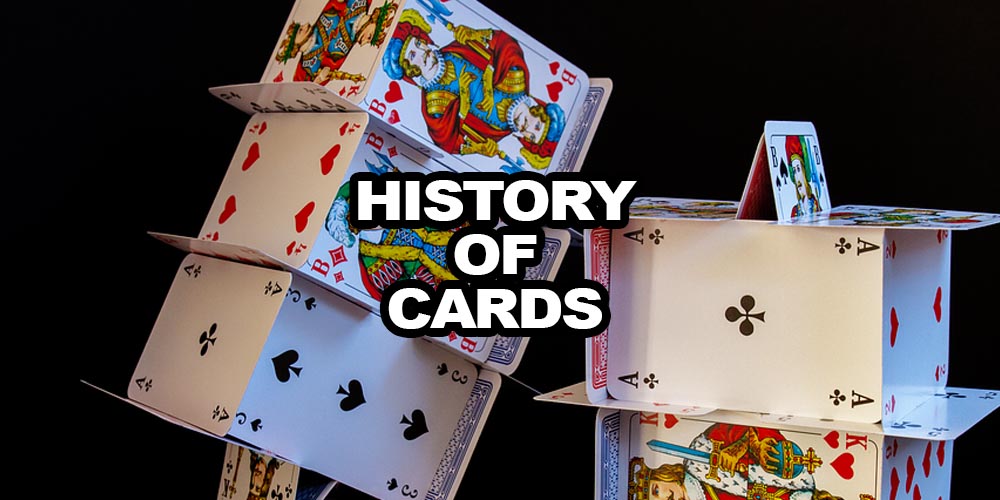 Can you imagine modern table games without the standard card deck? It seems that the traditional French deck has been around for a long time. However, the cards we all know today underwent a long process of evolution. Today, we are going to take a look at the history of playing cards.

There is no exact version where and when did playing cards appear. What we know for sure is that the current state of the card deck was formed in Europe. However, cards are believed to originate from India. Although Indian cards had a round shape, there are quite a few similarities with the modern deck. For instance, it also had 4 suits. Each card had a portrait of Shiva holding a coin, a cup, a sword, and a baton (club) in his four hands.

Coins, cups, swords, and batons were later used as suits for Latin decks, such as Portuguese, Spanish and Italian. These cards didn’t have a conventional suit system, and their first mention is dated in the XIV century. Moreover, there was no exact number of cards in each deck. Since Italy wasn’t a single state at that time, people were playing different cards in each region. In some places, there were more than 78 cards in a deck.

All of the Latin decks also had one feature in common – there were no Queens. Instead, they used a second Jack. While traditional Jack was a “junior” Jack, the second one was a “senior” officer. However, Italian decks soon started to feature Queens and this quickly spread throughout Europe. Besides, at that time, there were more pictured cards and less numbered cards.

Although the suits of Italian and Spanish decks were the same, there were some differences in their depiction. For instance, while Spanish swords were straight, Italian swords were bent and resembled sabers. In addition, the Spanish version of batons resembled modern clubs.

German 32-card deck and Swiss 36-card deck are also related to Italian and Spanish decks. These versions had 4 suits and Kings with two Jacks as well. However, the suits were slightly different. For example, they used bells instead of coins and acorns instead of swords. Moreover, the German deck featured leaves and hearts instead of batons and cups. At the same time, the Swiss deck had roses and shields. However, the overall pattern was the same.

The French deck is probably one of the most important variations of decks in the history of playing cards. It basically embodies all of the above-mentioned decks. The French deck has a 54-card deck with 4 suits – clubs, spades, hearts, and diamonds. However, if we take a close look at the form and symbolic meaning of these suits, it is clear that most of them are based on Latin, German, and Swiss decks.

For example, French hearts were borrowed from the German deck. The shape of the spades also resembles the leaf form. However, their symbolic meaning is similar to clubs and batons from Latin decks. By the way, Spanish batons or clubs shouldn’t be confused with the modern clubs, as these are older equivalents of spades. In the same way, the form of clubs reminds of oak leaves from German and Swiss decks. Moreover, the French word for clubs is trèfle, which means clover.

However, there is one more reason why the French deck became so popular. Each region of France had its own playing card manufacturers with their own designs and templates. However, by the end of the 18th century, card design from Paris became the most widespread. Moreover, each card was named after either a real person or a mythical character. For example, the King of diamonds was drawn as Julius Caesar, the King of spades as King David, the King of clubs as Alexander the Great and the King of hearts as Charlemagne. Sometimes, the Queen of spades was drawn as Joan of Arc.

The French deck soon became the most popular deck in Europe. It was much easier to memorize suits and use this deck for table games. Moreover, people liked the idea of portraying pictured cards as characters and historical figures. Furthermore, the French deck became a template for English and American card manufacturers. For instance, the well-known Bicycle decks were also inspired by the French deck.

As you can see, the cards we all know today had undergone a long process of evolution. Nowadays, online gambling sites in the UK still use the standard French deck – 52 cards and 2 Jockers. Of course, Latin, German, and Swiss decks are sometimes used for some games, but you wouldn’t see them that often.

Finally, if you are searching for an online casino site in the UK where you can play table games, then Betvictor Casino is going to be a great choice.

You can discover more about Betvictor Casino here.