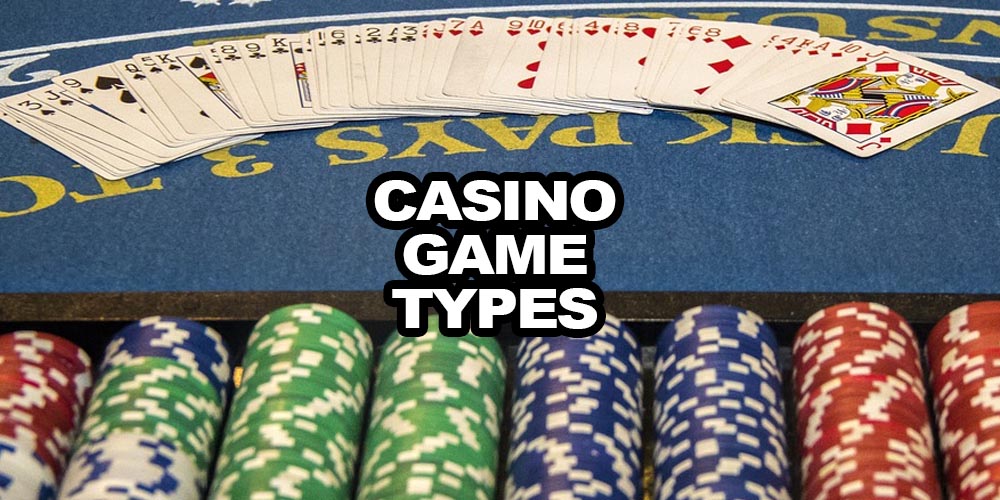 Many gambling games have been developed to attract the largest number of people. Some games require you to have a calculation ability to win, while others depend on pure luck. However, regardless of the nature of the game and its rules, you can win huge amounts of money playing any of those games. Check out the most popular casino game types, their rules, and how to play and win at them.

Poker is one of the most popular and most played gambling game in casinos. The game describes any card game in which the player can wager on their hand according to particular rules. There are many versions of the game including Texas Hold’em, Omaha, Seven Card Stud, Five Card Draw, and a few others. Although all of these versions of poker use the standard card deck, the difference is in the deck configuration. This means that each version has a different number of cards in play or a different number of cards that are dealt face up or face down. One thing is for sure though, in all of the versions, you can bet and wager on your hand in one round or more. Although a few versions of the game exist, It is very easy to understand and learn how to play poker.

The game starts with one player making a bet. After that, going clockwise, the next players have three different options. First, the first option is to call which means to match the previous bet made by the last player. The second option is to raise which when a player raises the amount they would like to wager on. Finally, the third and final option is to fold which is withdrawing from the round because the hand has very low winning odds. With poker being the most famous gambling game, several big wins have been recorded in live tournaments. The highest win in a single tournament payout in history belongs to Antonio Esfandiari as he won more than 18 million dollars in the WSOP event.

Blackjack is also one of the most popular casino game types as it requires skill rather than pure luck only. It is a card game where one or more players play against the dealer. What makes this game unique is that the players do not compete against each other, but they try to beat the dealer.

Similar to poker, the game is played using one or more standard decks of 52 cards. Each player is dealt two cards, and the dealer gets two cards as well. One of the two cards that the dealer receives is face up while the other is face down. The players then aim to reach 21 without going over that number. Each card has a different value. For instance, the aces are equal to 1 or 11, while the king, queen, and jack are equal to 10, and the number cards are equal to their face value. The dealer wins the game if they hit 16 or less, but if they stand if they hit higher than 16. All the players who do not go over 21 beat dealer and win.

One of the greatest players to play blackjack is Edward O. Thorp who is the card counting mastermind. He even wrote a book called “Beat the Dealer” explaining strategies on how to win at blackjack. However, if you are not a fan of reading books, check out this quick guide on how to play blackjack.

Named after a French word that means the little wheel, roulette is a game that you play when feeling lucky. If you are not good at math and not a fan of games that require calculation, then roulette is perfect for you. The rules of the game are very simple, and you do not always have to think about your next move. Basically, the objective of the game is to wager on where a ball will end up on a spinning wheel after throwing it. You can bet on the color, number, column, row, and the square the ball will land on.

Developed in 1788, Craps was created in the United States as a variation from the English game of Hasard. It is a form of a dice game where the betting players gamble on the outcome of the roll or a series of rolls. Craps is one of the casino game types that requires simple equipment as you only need a pair of dice and a table. The table has different parts that show several betting options. Although those options may vary from one casino to another, all of the tables usually have what is called a pass line which is the main focus of the game. The game is based on the number 7. For instance, 7 and 11 wins on the pass line, while the numbers 2, 3, and 12 lose. Check out this article to understand more about the details of how to play Craps as it is a quick guide to win you money casinos.

Although craps is a is highly dependent on pure luck, many people have earned millions playing it. The highest win of all time belongs to Archie Karas who won 40 million dollars playing craps. Since the game heavily depends on luck, in 1995 Karas lost close to 30 million dollars trying to win more money playing the game.

Slot machines are one of the easiest and simplest casino game types. The main objective of the game is to line up matching symbols to win money. Although the main objective of the slot machines is the same, there are thousands of different variations that you can access in casinos or online. While the game requires minimal thinking and calculation, you can increase your winning odds utilizing specific strategies. To understand those strategies, check out this article which explains how to play slot.

It is true that casinos offer an atmosphere and vibe that cannot be replicated online. You can still enjoy playing your favorite gambling game or trying out a new one online. Online casino sites in the US, you can find all the games you like from poker, blackjack, and many more games.