As we look forward to 2011, GamingZion sincerely hopes that all governments recognize the benefits of legalizing and taxing all offline and online gambling operations. 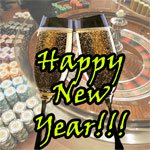 The year 2010 is quickly drawing to a close. For some like C.R. who won €2.5 million playing Mega Moolah at Golden Riviera Casino, it has been an incredible year.

On the other hand it has been an awful year for many Americans who’ve lost countless dollars as the Unlawful Internet Gambling Enforcement Act (UIGEA) came into effect. Countless online gamblers were left financially stranded when the United States shut down the online gambling finance processor eWalletXpress, among others.

But it hasn’t been completely bad news in America. Despite the UIGEA, the United States Senate attempted to secretly legalize internet gambling and PartyGaming cofounder Dikshit didn’t go to jail for violating American Gambling laws. While MasterCard turned their back on US online gambling, Visa remained useable for online gambling in the US – GamingZion.

Nor has it been news throughout the rest of the world. The , now that they allow foreign operators. after the Baltic nation’s first triumphant year of liberalization.

As we look forward to 2011 — wherever you gamble and whatever your game — GamingZion sincerely hopes that all governments around the world recognize the benefits of legalizing, regulating, and taxing all offline and online gambling operations.