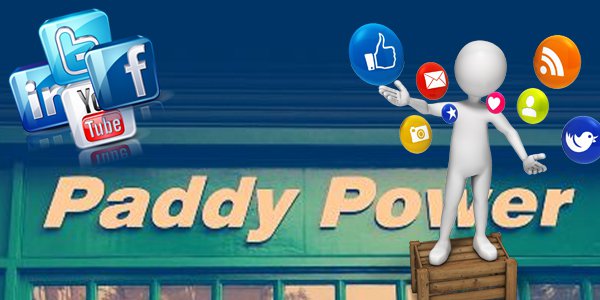 Capturing the British gambler’s attention is no easy feat for bookies with giants like Ladbrokes and William Hill around, but Paddy Power managed it, utilizing social media.

At the start of 2012 Paddy Power had received moderate to poor success with their advertising and brand awareness campaigns; okay some were fruitful, but in the long run and long term the Irish bookmakers were seriously falling short.

They certainly couldn’t blame the punters who always have, and look to continue loving to bet on sports in the UK. Something wasn’t right with the way Paddy Power were trying to reach their customers; what they were doing wasn’t necessarily wrong, it just wasn’t working; they just couldn’t get the numbers they wanted and needed.

They had to begin a new strategy, and it had to be good. Paddy Power had to outgun the big boys, Ladbrokes and William Hill, and they reasoned that the way to do it was through social media.

By mid 2013, everything had changed; Paddy Power was now competing as a well established brand, and they were generating a staggering 83 times as much conversation online as BlackBerry was.

The campaign started after a gambling fan innocently posted on the company’s Facebook page; he told them that he had become tired of the same old marketing messages perpetuated by all the current big players, he wanted to know how Paddy’s intended to stand out.

The bookmakers seized on the opportunity, realizing to improve their business and profits, they could make an impact by just listening to what punters had to say and reacting quickly in an entertaining way; thus the ‘We Hear You’ campaign was born and they never looked back.

Every action, every ad, and every viral video produced was developed in response to customers’ posts on their Facebook page, or as a reaction to previous social media stories.

The aim was to get Paddy’s involved in everyone’s total sporting experience, not just the gambling side of it; this came after the crucial realization that placing bets either in a bookies or using online sportsbooks in the UK, is only one small part of their customers sport activity.

People were sports fans first, and gamblers second. The ‘We Hear You’ campaign ultimately looked to establish a platform for two-way conversation, and allows Paddy’s to listen, understand and directly respond to their customer’s needs and questions.

The bookmakers decided to target three big sporting events that year, to kick-start everything; they wanted to truly ‘own’ the big events and put their punters at the heart of everything they were doing, utilizing social media as a crowd-sourcing medium to generate their ideas.

First up were the Cheltenham horse races in March 2012. A simple enough comment on their Facebook page from a fan discussing Chavs – which is a British term for lower-class groups of social degenerates – turning up to the races spawned their whole Cheltenham campaign.

The company made a TV ad, and then a second online ad after the TV piece was subsequently banned; both went viral online and had everyone talking; the videos had over 2 million views and they had gained peoples attentions.

The company then turned their focus to the 2012 Euro football competition and then the Ryder Cup golfing event. Television, radio, newspaper, online adverts, viral videos and bizarre real-life stunts all became part of their plan.

At the beginning of the Ryder Cup, people were invited through twitter to have their live tweets of support for the golfers written in the sky by stunt planes; this went down a storm and the messages could be seen by all within a 20-mile radius.

Paddy Power now genuinely owned the big events and people were seriously more aware of them after less than a year’s efforts.

The results were a 2000% growth in their social footprint, making them by far the more successful social player in their industry. The Paddy Power Facebook page now had over half a million fans; Twitter had 140,000 followers. Related gambling news carriers, and unrelated news outlets – both national and international – were covering the brand heavily.

Video views, internet friends, comments, and awareness don’t pay the bills though, and the true measure of success for any business is undoubtedly always going to be centered on money and profits. The return for the campaign over the first year was estimated at around £10million; not bad.

Customer acquisition went up +50% to over 1.2million active customers, revenue growth went up +29% and profits went up +29% too. The company share price grew in value by an impressive +54% over the first year.

Literally only positive things came from their online awareness actions, and they totally changed the company’s face in less than a year, which is definitely an impressive achievement.

Paddy Power is now perceived as being on the customer’s side, and dare I say it ‘cool’. The amount of media coverage they continue to get due to their campaign is astounding, and their fan base will continue to grow. They have shaken the ‘grubby’ image of bookies shops and genuinely appeal much more to the younger, more online, generations now.

The very fact that this article has been written shows the level of awareness, and that everyone is impressed by how Paddy Power changed the game and beat their competitors.