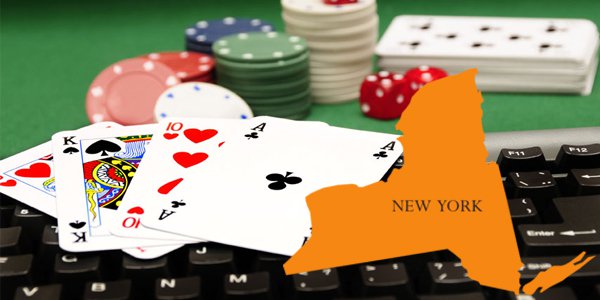 New York is also on the way to allow online poker sites within the state borders.

Online poker legalization under American gambling laws is gathering new momentum. Not only it is already legal to play in three states: Delaware, New Jersey, and Nevada, but a handful of other jurisdictions are looking to jump on the band wagon.

Poker has always been one of the favorite American pastimes ever since the Wild West times. However, just like with everything in the US, there are both proponents and opponents of the legalization. On one hand we have a newly formed lobby to ban online poker on a federal level, while on the other there are individual states looking to legalize and regulate the game for their population.

While the three above-mentioned states have already opened their legal American poker rooms, next up are California and New York. But the latter has to face a dilemma coming after disappointing results of the three examples. The tax revenues after legalization have failed to reach projected levels, and now the Empire State is on the crossroads when online poker is considered.

An industry expert, Nicholas Kisberg, has recently explained the slow start in American gambling news: “The market is still maturing. While online gambling does see steady growth in regulated markets, it does take time for players to become comfortable with the operators. In addition, traffic levels at poker rooms – a factor that is essential to their success – take time to reach critical levels that create exponential growth.”

A little bit of history

When the UIGEA (Unlawful Internet Gambling Enforcement Act) was enacted in 2006, it basically meant the end of online poker in the USA. Since financial institutions were forbidden to process any online gambling transactions.

While some sites decided not to close shop, it all ended in April 2011 during the events known as Black Friday. The Department of Justice carried out raids against the three largest poker operators, seizing assets and funds.

When all the commotion settled, the Department of Justice has relaxed its opinion of the Wire Act, effectively allowing online poker and casino games in individual states, provided there is such a legislation there.

The first ones to act

The change in DoJ’s stance on the Wire Act served as a green light to states who always wanted to legalize online poker for their people. It was only natural that Nevada and New Jersey acted first. After all these are the two states with the largest land-based gambling industry. Delaware was quick to seize the opportunity to lay their hands on some tax money and joined the pioneers.

Currently, there are a handful of states considering legalization of online gambling within their borders. Pennsylvania, California, Massachusetts, and Illinois are regarded as the next jurisdictions to alter their regulations and allow online poker at the very least.

Is New York next?

New York is certainly not thought of as a casino state, but it’s historically recognized as a poker state, producing quite a number of world champions. Senator John Bonacic has recently introduced a bill seeking to recognize poker as a game of skill in the state. The bill is now awaiting approval by the New York’s Senate Committee on Racing, Gaming and Wagering.

Should the bill go through, New York will only allow online poker to its residents. Potential operators will have to pay $10 million for a license and a 15% tax on gross gaming revenue to host online poker games in the state.

New York will most probably follow New Jersey’s example and include a “bad actor” clause in the new regulations. This clause will ban any online poker room, which has processed payments illegally after UIGEA came into force back in 2006.

Basically, this means that giants like PokerStars or Full Tilt Poker are not allowed in New Jersey (or New York for that matter). PokerStars is already feeling the pain, banned from teaming up with any land-based operators in New Jersey. They have also been banned from operating on Nevada for at least four more years, and will not be allowed into any inter-state deals.

While setting up online poker sites in Nevada and New Jersey is relatively easy, since they already have land-based operators to partner up with. New York lacks in this respect. Luckily, there are plans to build four privately-owned gambling resorts in the state.

After a new piece of legislation has been approved by Governor Andrew Cuomo last year, New York can expect up to seven casinos built in the state. Possible locations are Southern Tier, Catskills, and Albany. Naturally, it can’t be said with certainty that these land-based operations will team up with online poker sites, but why on Earth would they give up opportunity for increased revenue?

What does the future hold?

The financial figures from the three states that allow online poker are not too optimistic. But the business is just restarting and it is certain to pick up the pace. However, help from inter-state compacts and of course major poker sites (say hello to PokerStars again) is needed in order to speed things along.

Moreover, banks and credit card companies are still feeling uncertain about allowing payments to and from online gambling sites. Geo-location is not perfect yet, but getting there. And of course, there’s Sheldon Adelson with his lobbying against online gambling altogether. But online poker in the USA is still extremely popular and there seems to be no reason not to capitalize on this fact.

Several market research companies predict a steady growth of online gambling industry in United States over the next five years. Revenue estimates go as high as $9 billion by the year 2020.

One of the biggest problems online gambling in the US faces is the population of individual states. While California will have no trouble reaching out to its 40 million residents, Nevada and New Jersey can only boast 3 and 9 million people respectively.

This brings a much needed necessity of inter-state agreements, which will help books the online players numbers. New York, however, has 20 million residents and naturally has a lot of potential to capitalize on legal online gambling.

Other factor is represented by dozens of unregulated sites, still reaching out to the American gambling market. They will definitely still some players from the licensed site, if the issue is not addressed soon.