How to Enter DFS Tournaments in 2022

News >How to Enter DFS Tournaments in 2022 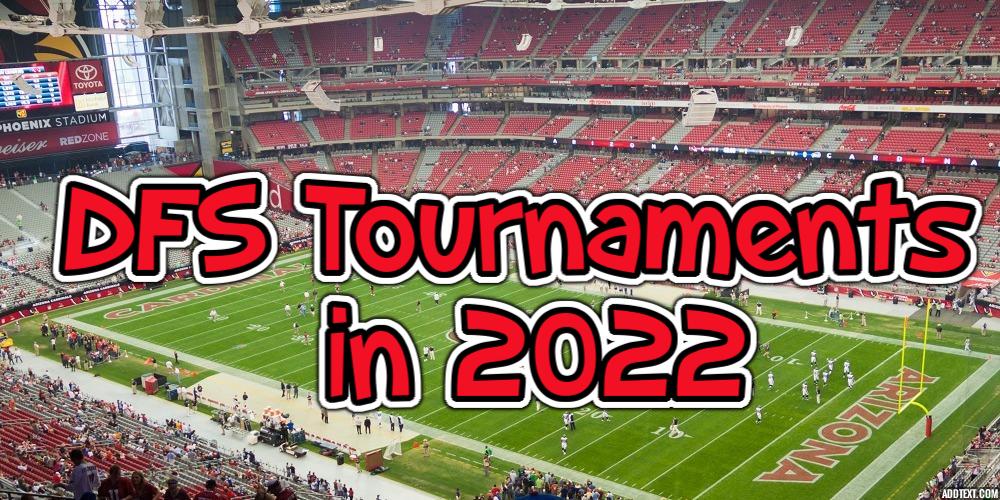 Daily fantasy sports are online tournaments that last short periods: from one match to one round. Each player receives a new price for each tournament according to the difficulty of the match and the current form. Indeed, the tournament sets a ceiling on the cost of the roster, which cannot be exceeded, and several restrictions: the number of players from one club to the tactical scheme. Besides, the presence of a certain number of players for each role is mandatory. In this article, we will discuss how to enter DFS tournaments.

First of all, there are Large Guaranteed Prize (GPP) tournaments that are the most popular tournament type and the backbone of daily fantasy sports. Usually, the prizes include 15-20% of the announced line-ups. Besides, the reward is rapidly decreasing from the first to the last prize-winning place. In the fight for the main prize, the manager can declare several lineups (make multi-entrances). Indeed, it is in these tournaments that vivid success stories are born. Moreover, it is on them that fantasy venues make the main emphasis in marketing campaigns.

Additionally, 50/50 (Double-Up) tournaments exist. Here the upper half of the final table doubles the buy-in (of course, except rake). Meanwhile, the lower half is left with nothing. This is a specific type of tournament with a special approach to team building. In terms of guarantees, it is significantly inferior to classic tournaments and is not popular in Europe. However, online daily fantasy sports sites in the USA can hold such competitions.

Meanwhile, head-to-head tournaments, where balanced line-ups are collected, are similar to 50/50 tournaments. However, the difference is made due to several successful decisions for unobvious players. They can be extremely profitable at a distance. If you choose the right opponents, look for weaker players and don’t play against regulars. It is cost-effective when regularly monitoring the lobby for tournaments created by weak opponents. There are other types of fantasy tournaments, but they are derived from the listed ones. At the same time, the main focus should remain on GPP tournaments. Indeed, they are the ones that receive the most attention on the main fantasy site FanTeam. But how to enter DFS tournaments?

Guide On How To Enter DFS Tournaments

There is always a guaranteed prize pool in GPP tournaments – this is the amount of money that will be played regardless of the number of registered squads. To register a squad for the tournament, the manager must pay the buy-in. Of this buy-in, usually, 90% goes to the prize pool, and 10% goes to the fantasy site rake. Meanwhile, one manager can register several squads. However, the total amount of lineups in a tournament may be limited. For example, let’s take a tournament with a guaranteed prize pool of $ 90,000 and a buy-in of $ 10. This means that the site expects a minimum of 10,000 entries. If there are more entries, then the prize fund will grow.

In order not to go into the red, it is enough to collect teams ~ 11% better than the average player. The gathering of teams at least 12% stronger than the average on the court will ensure the game is a plus. You just need to fill the distance. And if someone is lacking skills, practice is the best solution. Good luck!

The collection of the composition for the daily fantasy can be divided into several stages:

In Daily Fantasy on FanTeam, the guaranteed funds of the Weekly Monster in the English League are also very impressive:

Moreover, this is not the limit: prize pools increase on certain days. Just a few tours ago, FanTeam secured a $ 100,000 big Weekly Monster guarantee. But how are these tournaments held? Usually, it’s one round, 8-9 matches, and 11 players. You create a team of goalkeepers, defenders, midfielders, and forwards. No more than 3 players can be taken from each real team. Then you choose the captain – the player whose points will be doubled – and the vice-captain – the player who will become the captain if the main player does not play for 1 minute. More often than not, expensive options from the top clubs are indispensable. However, first of all, inexpensive differential picks of players with a low percentage of ownership, but good expectations provide a good result.

Why And How To Enter DFS Tournaments

Indeed, fantasy sports increase interest in watching matches and change the perception of the game. You start following the players of your fantasy team much more closely, you fear substitutions and watch the match with hope until the final whistle, regardless of the score. With an active fantasy game, favorites appear among little-known players, an emotional connection is created with them and it becomes interesting to watch even non-status matches. Besides, dismantling nondescript outsiders can become the main game of the weekend for you, because it is in it that the fate of large prize money for winning a fantasy tournament is decided.

For the best managers, fantasy sports can be a major source of income, and each tour can generate tens of thousands of dollars. The variety of sports and tournament types in fantasy allows everyone to find their lucrative niche. Additionally, the gathering of a fantasy team with claims to victory turns into a sports puzzle with many non-obvious solutions. Due to several restrictions, different strategies are born, and the management teams can be very different even within the same tournament. In this intellectual competition, there is no single correct approach and there is always room for creativity. To show the skills you can:

And if you still do not know how to enter DFS tournaments, read our article about the Best Countries to Play DFS in and visit the FanTeam website. Enjoy your hobby and make real money in no time. Break a leg!